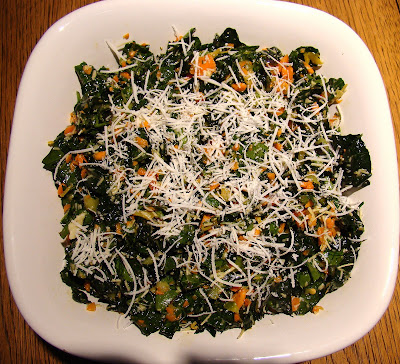 This is a colorful, elegant salad that's a pleasure serving with love and a toast to good health, made from one of the most nutrient-dense vegetables available. One cup of this delicious salad provides 1,300% DV vitamin K, 200% DV vitamin A, 88% DV vitamin C, and many other nutrients including protein, minerals like manganese, magnesium, calcium, and copper, antioxidants like Superoxide Dismutase, sulforaphane, lutein, kaempferol, and quercetin, and other phytonutrients including at least 45 different flavonoids.


*Use as many organic ingredients as possible. Feel free to substitute your choice of herbs.

Whisk together lemon juice, olive oil, garlic, herbs, salt, pepper. For an extra kick, add a pinch (or more to taste) of hot red pepper flakes.
Pour over kale in serving bowl and toss well.
Add 2/3 of the cheese and toss again. Garnish with the rest of the cheese.

This salad should be prepared at least a few hours in advance, and keeps well for a couple of days covered in the refrigerator. Many raw fruits and veggies are difficult for me to eat due to my digestive disease. When I first tried kale, both raw and cooked, it didn't seem to be a vegetable I could tolerate. Advance preparation of this salad though, combined with lemon and raw cider vinegar, not only helps develop the sulforaphane, it also tenderizes the kale, making it easily digestible even for someone like me with a very sensitive digestive system. 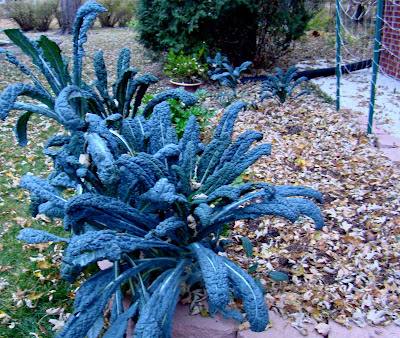 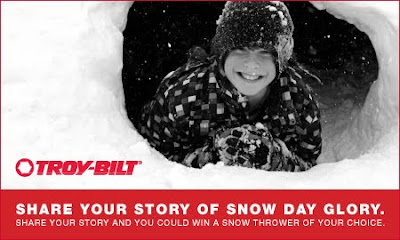 The stricken metropolis lay gasping, barely able to move. The storm swatted it, slugged it, smashed it, crushed it in 75 million tons of snow. But in the end the metropolis did not break. Like a dazed giant, it shuddered under the monstrous weight and began stumbling to its knees . . . then regained its feet . . .

Tens of thousands of Chicagoans fought the storm, from the first. They met the superstorm and the storm could not break the city. So, remember: It snows in Chicago. It gets cold in Chicago. And we do not break. ~ M. W. Newman, from the now-defunct Chicago Daily News.

And so it was on Thursday and Friday, January 26th and 27th, 1967. For a nine-year-old girl, those were exciting, wonderful, memorable days. Beautiful muted light came through snow-covered windows as a hearty, homemade stew bubbled in the kitchen. Outside, impromptu snowball fights broke out. Snowmen, snow forts, and snow angels were created. In homes throughout the city, little jackets, mittens, and scarves were draped over radiators to dry while rosy-cheeked girls and boys sat at kitchen tables sipping sweet, steamy Ovaltine.
Mom remembers our street didn't get plowed for a long time. (I know, hard to believe this could actually happen in Chicago. ;) She recounts, "Residents with snow shovels (who had snow blowers in those days?) got together and shoveled out streets and alleyways. In our neighborhood, the only way into your garage was through the alley. Garbage trucks went down alleys to pick up garbage. There was no garbage pickup until you got your alley shoveled out yourselves, so garbage was piling up and adding to the blockage. I remember Dad and a couple of others shoveling out that whole alley. Out on the street, cars were buried over their tops in snow. When you tried to shovel out, there was no place to put the snow. There were lots of unhappy people who, when they finally shoveled their cars out, came home to find that the snow from someone else's car had been dumped in their spot. It took many, many days to clear out."

We don't remember for sure how long school was closed. It was a long time though, maybe even as long as two weeks. Normal life in the city was disrupted for a long time. Even putting food on the table was challenging for many families in the aftermath of the storm. Mom says, "Stores ran out of groceries because delivery trucks couldn't get through. I don't remember how long it was before we could get to the store, but it was quite a while. I think the cupboard was getting a little sparse. We ran out of milk and some other staples. We didn't know how long the supply of toilet paper would last - I think we finally had to use kleenex for a couple of days."
I remember running out of milk too. I remember them talking about the milk shortage on the 6:00 news. It was a big problem. We needed it for our Ovaltine!
~~~~~~~~~~~~~~~~~~~~~~~~~~~~~~~~~~~~~~
That's my snow-day memory - what's yours? Share a favorite snow-day memory in the comments section of this post for a chance to win your choice of one of the following snow throwers compliments of Troy-Bilt: 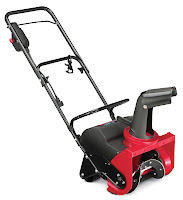 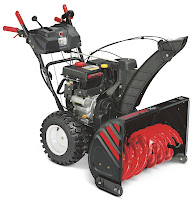 
· Just One Hand operation – steer with one hand, freeing the other hand to adjust the chute direction without stopping
· 30” clearing width
· In-dash headlight and reflective strips for safer operation
· Standard heated hand grips

Contest Details: Snow thrower giveaway is sponsored by Troy-Bilt, and is open to US residents only. Winner will pick between the 3090XP and the Flurry, depending on where they live and snowfall. (Troy-Bilt can provide assistance to winner in making their selection if unsure.) Contest ends at midnight, CST December 3, 2010, and winner will be selected using Random.org.

FTC Disclosure: As host of this giveaway, I will be receiving a complimentary snow thrower, and will review it in a later post.

12/4/10 Update: As I write this, we are in the middle of our first snow storm of the season, with about 2 1/2-3 inches on the ground already this morning. Our new snow thrower has arrived and been uncrated, ready to go to work later today.

Entries for the drawing closed last night, and this morning, using Random.org, a winner has been chosen. (Drumroll, please!)

Congratulations Ramble On Rose!!! You are our winner, and you'll get to pick which snowblower is best for your family's needs. I'm very excited for you! 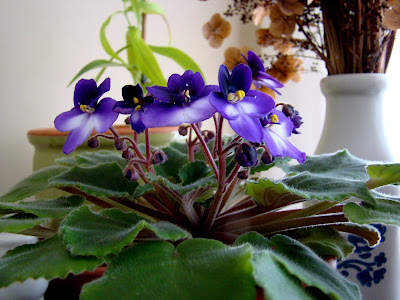 While we still have a few late bloomers in the garden, this is my favorite bloom this month. I haven't had an African violet since I was a kid. This one was picked up at the grocery store a few months ago. This is the first time it's rebloomed. Looking at it makes me feel nostalgic, reminding me of being a little girl, doing my first plant propagation experiments with African violet leaves, spider plant babies, and purple passion cuttings. 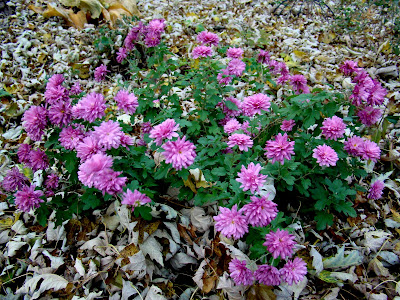 In the garden, mums are still looking pretty good. 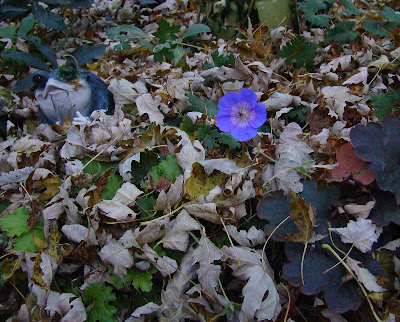 Although we had our first hard frost of the season earlier this month, Rozanne geraniums haven't quite called it quits yet.

Also blooming in our mid-November garden are asters, calamint, hardy cyclamen, and a late-blooming cimicifuga. We even have a hosta and a foxglove (Digitalis grandiflora) that decided to rebloom this month. Both are much less showy than their first blooms, but they're blooming nonetheless. 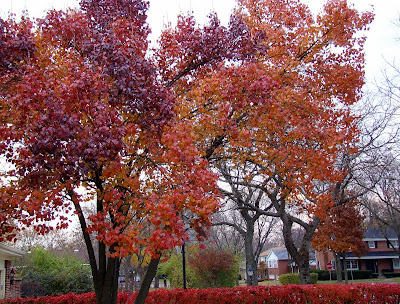 It's not a bloom, but the Bradford pear has been especially gorgeous this fall. (The burning bush hedge has been particularly beautiful too.)

Chicago's warm, sunny fall is yielding to November's typical cloudiness and chill. I used to hate this time of year. Something's changed in me though in recent years, and I now welcome it, and winter too. Life is beautiful in all its seasons. 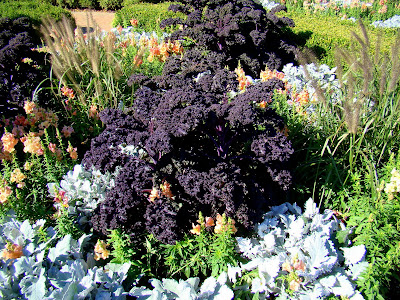 Redbor kale at Chicago Botanic Garden (September 2010)
Superoxide Dismutase is Expialidoshus,
Even if the sound of it is something quite atrocious.
If you say it loud enough you'll always sound precocious,
Superoxide Dismutase is Expialidoshus!
Kale is rich in antioxidant, anti-inflammatory, and anti-cancer nutrients. For example, Superoxide Dismutase (SOD,) is an important phytonutrient, an antioxidant abundantly present in kale. Kale is an all-around nutritional powerhouse; rich in calcium, iron, magnesium, manganese, lutein, beta-carotene, omega-3 (ALA,) at least 45 different antioxidant flavonoids, fiber, and vitamins A, C, and K. It's a sulfur-rich vegetable, which in part accounts for its reputation as a detoxifying, medicinal superfood. Sulforaphane is formed when sulfur-rich cruciferous vegetables such as kale are chopped and chewed. Sulforaphane triggers the liver's production of detoxifying enzymes, helping the body cleanse itself of some of the dangerous environmental and ingested toxins we're exposed to in this chemical age.
We're growing kale in our garden for the first time. I didn't know much about it when it was planted, only that it looked cool, and would be one of the hardiest vegetables I'd ever grown. While this might be the first time kale has grown here, it won't be the last now that I know what a fantastic food it is. And, while most of the veggies are now toast following a killing frost last week, our kale is still beautiful and delicious. We can expect to still be harvesting it for weeks to come, even here in our zone 5 garden. In fact, like brussels sprouts, the flavor of kale improves and becomes even sweeter with the frost and typically chilly weather of November in Chicago.
There are many delicious ways to enjoy kale, either raw or cooked. It can even be a beneficial addition to a beloved pet's diet. George enjoys it immensely. He eats his kale raw, finely chopped and mixed in with his homemade, whole-foods diet. Kale is one of a variety of nutritious vegetables recommended by George's new holistic veterinarian. It's so rewarding knowing I'm growing some of the food that is nourishing him through his remarkable recovery from a number of geriatric health challenges.
Back in September, when I met up with Monica, Diane, Rose, and Beckie at Chicago Botanic Garden, we saw Redbor kale not only in the vegetable gardens, but also in ornamental plantings throughout the gardens. As you can see in the photo, it is really beautiful. For ornamental gardeners who don't have dedicated vegetable growing space, consider adding kale to your ornamental beds for its beauty, and be sure to harvest some for your kitchen for your own inner beauty and good health!
Posted by garden girl at 11/11/2010 05:10:00 AM 12 comments: