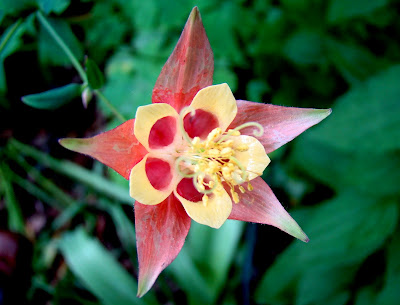 It's Wildflower Wednesday - the fourth Wednesday of the month, when bloggers all over the world share their love of gardening with native plants and wildflowers.

I've always loved the beautiful columbines, and grew a variety of cultivars in the past. Columbines are perennials, but can be somewhat short-lived. The solution - natives! While they too are sometimes short-lived, when allowed to set seed, they sow themselves freely around the garden. Extra plants can be left where they're growing, moved to more desirable locations, shared with other gardeners, or easily weeded out if they're too plentiful. Deadheading (removing spent blooms,) will prevent them from self-sowing if you prefer.

The columbine shown above is Aquilegia canadensis, also known as Eastern red columbine, or Canadian columbine. Although one of its common names is Canadian columbine, it's also native to much of the US, including Illinois. A few of them were added to our garden three years ago. All three have continued to come back each year, and we also now have a few extras that have sown themselves around the garden. 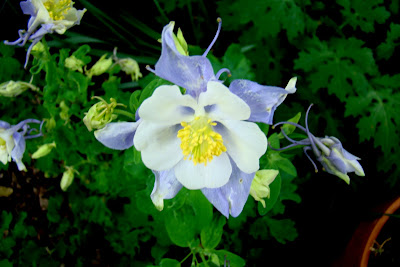 This one is Aquilegia coerulea, also known as Colorado blue columbine or Rocky Mountain columbine. Ours were started from seeds three years ago, and bloomed in their second spring. Native in the Rocky Mountain states, they've been happy here in our Illinois garden. Their soft blue and white blooms are most welcome. 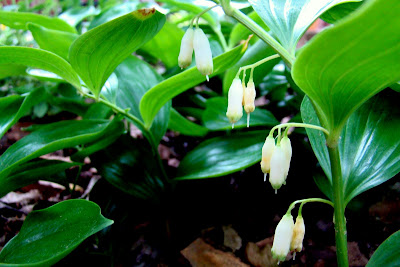 Polygonatum commutatum, commonly known as Solomon's seal is native in Illinois. There's a nice little patch of Solomon's seal here. The blooms are small and demure, and hang sweetly beneath the foliage. I was given a half-dead pot of Solomon's seal that had struggled in a nursery's 'hospital zone' all year. It was mislabeled as Tricyrtis "Lemon Twist,' commonly known as toad lily. Since this plant struggled in our garden for a couple of years, and since I'd never grown either toad lilies or Solomon's seal, although I questioned its identity, I didn't know what it was until it bloomed for the first time last spring. Since then I've added a few toad lilies, and I'm thrilled having this nice patch of Solomon's seal in our garden. I'm not convinced this is a native Solomon's seal, since it came from a nursery that doesn't specialize in natives, the foliage is shinier than what I've seen on the natives around here, and it was mislabeled as a Tricytris to boot. 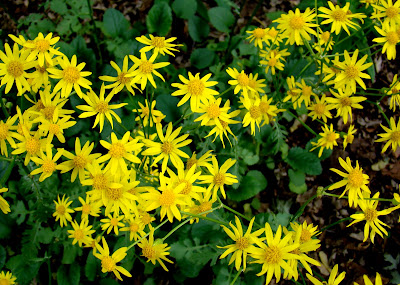 Senecio aureus, commonly known as golden ragwort, is in its glory right now. Covered with small, yellow, daisy-like blooms, it's native in Illinois, as well as in Tennessee where Gail, the host of Wildflower Wednesday lives. A few years ago Gail shared some with me. They've been happy here in our woodland garden. I love the shiny evergreen basal foliage and the bright yellow blooms.

According to the Illinois Wildflowers website, the nectar and pollen of golden ragwort attract small bees and flies. Among the bees, are such visitors as Little Carpenter bees, Cuckoo bees (Nomada spp.), and various Halictid bees. Among the flies, are such visitors as Syrphid flies, Tachinid flies, and miscellaneous others. The caterpillars of the moth Orthonama obstipata (The Gem) feed on Senecio spp. (Ragworts). 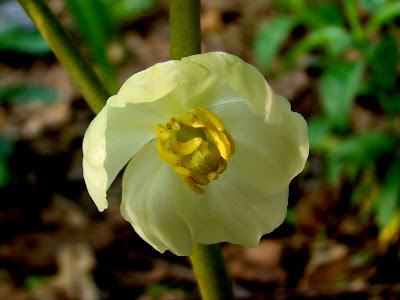 Podophyllum peltatum, commonly known as mayapple, is a recent addition to our garden. Last spring while visiting Mom, I spied a large colony of mayapples in Mom's woods, and brought home two of them to add to our garden. I was excited to see it bloom this year! Most native plants are slow to establish in our silver-maple-root-riddled garden, but one of the mayapples surprised me with this lovely bloom a couple of weeks ago. The blooms hide beneath the umbrella-like foliage, and are worth looking for. Later in the season, the blooms form little fruits that are edible, although toxic consumed in large quantities. Mayapples have medicinal value for cancer and certain skin conditions, however due to their toxic properties, medicinal applications are best left to those who are highly knowledgeable in their application. 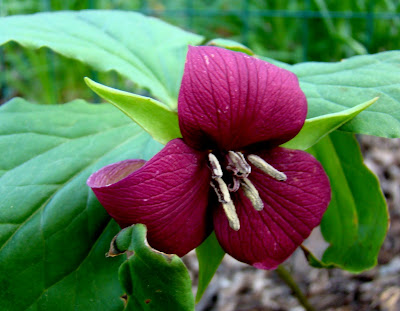 I called this trillium red in my recent Bloom Day post, but it may actually be a purple trillium. It was purchased five years ago at a big box store, and was labeled only as a trillium. If anyone knows what kind it is, I'd be thrilled if you let me know. It only took five years to finally bloom, and whatever its botanical name, I'm happy it finally did! 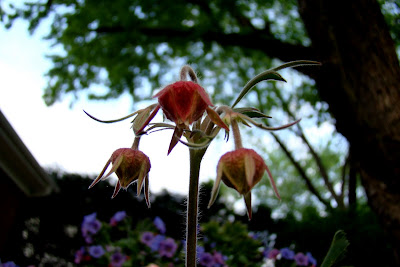 I first saw Prairie Smoke (Geum triflorum) three years ago at Chicago Spring Fling, and promptly got two of them at a native plants sale a few weeks later. The second one disappeared last fall, and this remaining one is blooming for the first time. I hope it seeds itself around the garden. I'll probably save some of the seeds too, to boost the odds of having a few more of these neat little plants in our garden. 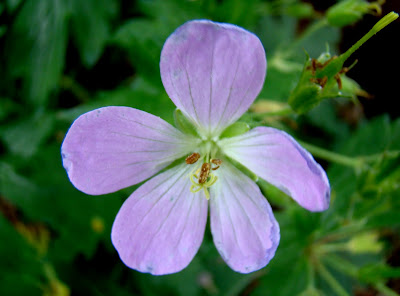 Wild geranium (Geranium maculatum) was also first seen during Chicago Spring Fling, at the Alfred Caldwell Lily Pool garden in Lincoln Park. It too jumped into my hands at the same native plant sale prairie smoke came from. Unlike the prairie smoke, wild geranium bloomed in its second season here. 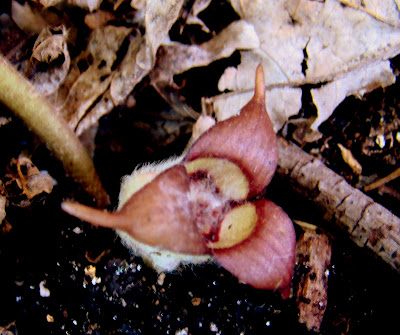 Wild ginger (Asarum canadense,) is a commonly occurring woodland native in Illinois, and the most recent native introduction to our garden. You must look under the foliage, close to the soil surface to get a peek at its unusual bloom. Although not related to the ginger root found in your grocery produce section, or the dried, powdered spice, wild ginger root smells and tastes very similar and can be used in cooking. There are no plans for that here - our wild ginger will be left in the ground to form a colony in its new home.

A Murder of Crows 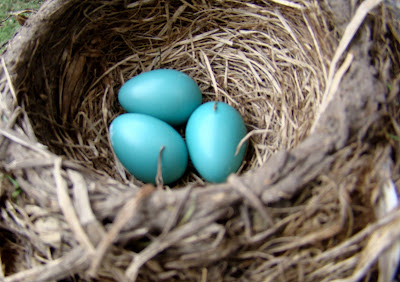 
It seems to be the refrain this spring . . . After an unseasonably warm few days last week, we're back to chilly, damp, rainy weather again.

The rain is welcome, as last week's extreme temperatures parched the soil. As for the chill . . . well . . . since I'm not a fan of extreme heat, the cooler temperatures are welcome too. 94 degrees in May, which we had last week, is just a bit much. If I got to choose, I'd pick sunshine and temperatures in the 60's, 70's, and 80's all. year. long, with rain only at night. I think that means I should be living in Maui, although even there it rains during the day.

In spite of the vagaries of this month's weather, our garden is blooming beautifully. In spite of how busy spring can get for me, I always remember to take time to stop and smell the flowers. Working in a client's garden last week, I thoroughly enjoyed the intoxicating scent of Korean Spice viburnums following me everywhere I went. I'm sure this weekend's weather has done them in. I find myself looking around our garden for space for one here.