Wish I Lived in Iowa on Tuesday

Update 11/5/10 - Francis Thicke ran for Agriculture Secretary of Iowa. He was the only candidate for statewide office in the entire country running on a sustainability platform. Running against a candidate whose campaign was largely supported by Big Ag, he unfortunately wasn't able to garner enough votes to win the office - a loss for Iowa, and a loss for the entire country.

My fervent hope was that he would win. Our country is sorely in need of environmental consciousness among our elected officials. Although Mr. Thicke didn't win this election, he had broad-based support in Iowa and added a great deal to the very important conversation in the US regarding the need to return to sustainable agriculture. Small family farms have taken a beating in recent decades in this country. Government subsidies have contributed in large part to the growth of industrial-scale farming and contributed to the decline of family farms.

With the explosive growth of farmers markets in recent years and a small percentage of consumers demanding and seeking out safe, healthful food for their families, organic, sustainable farming methods are on the rise. While the end of October also signaled the end of farmers markets for this year in our area, I encourage everyone who hasn't yet to investigate how your food is being grown. If you haven't, and if you're purchasing conventionally-grown, factory-farmed meat, eggs, dairy, and produce, you might be quite shocked at the conditions your food is being grown in and shocked at the hormones, antibiotics, pesticides, and other chemicals on your dinner plate. If you haven't already, watching the documentary film Food Inc. is a good place to start.

It's no wonder the health of our nation has declined so dramatically in recent decades. The rise in degenerative disease in this country is shocking. Big Ag is poisoning our food, water, and air, and Big Pharma is continuously coming up with new, and often more dangerous drugs to treat the diseases our adulterated diets (not to mention our chemical-laden soaps, shampoos, toothpastes, deodorants, cosmetics, and cleaning supplies) are triggering.

Events in my own life in recent years, including developing a chronic, inflamatory autoimmune digestive disease several years ago, returning to my vegetable gardening roots in the last couple of years, and nurturing my ten-year-old puppy George back to good health through a radical change in his diet have been eye-opening experiences.

You may be wondering why I'm talking about this. This is a garden blog after all. Aren't I supposed to be talking about pretty flowers and beautiful tomatoes?

Although I was told several years ago when I was handed the diagnosis of my condition that it was treatable (with drugs,) but not curable, I'm now on a mission to prove the doctors wrong. Heartened by witnessing seeing my beloved companion George healing from his chronic, supposedly incurable health conditions through dietary changes, I'm resolved to get the toxins out of my own diet, and out of my environment as much as I can. If changing from a commercially-prepared diet to a healthy, pure, whole-foods diet works for an elderly dog, it can work for humans too. I'm on a mission to prove that for myself, and will be sharing my journey with you in the hope that it may be of some value to you too. If it makes a difference in the life of just one person, or even one pet, it will be worth the effort. 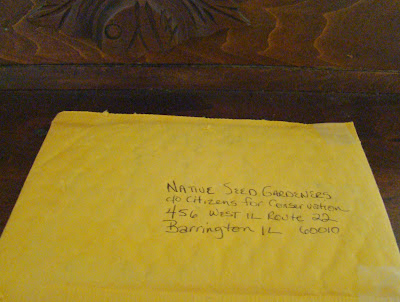 Last year I began participation in Native Seed Gardeners, an organization that uses home-gardener-volunteers to grow native plants. The purpose is seed collection and use of the seeds in restoration of conservation lands. We're growing purple milkweed, cream baptisia, and Canada hawkweed for the project. Just this morning I mailed this year's seed harvest - a packet of hawkweed seeds.
So far only the hawkweed has bloomed. Purple milkweed (Asclepias purpurascens,) is little, but still has big fall color. 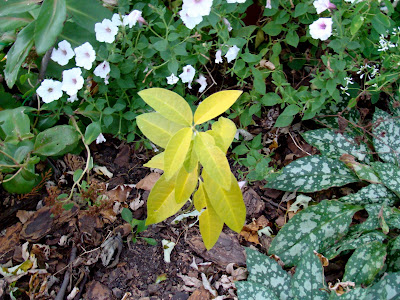 Canada hawkweed (Hieracium canadense,) bloomed its first season, and bloomed off and on again this year from late June through September. I'm sure I must have a few, but since I couldn't locate any photos of the hawkweed in bloom, here's what it looks like now. 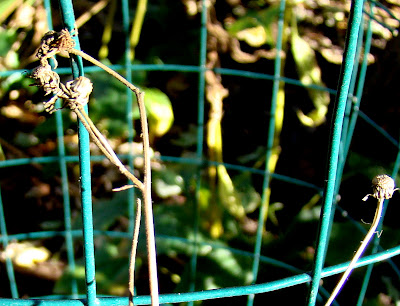 Canada Hawkweed is in the aster family. It looks like a tall dandelion, and can be anywhere from about two to five feet tall. This year It grew to almost three feet, and bloomed well in a spot that gets about three hours of filtered sunlight a day. It's a sunny, cheerful bloom. It's not a plant I would have thought to add to the garden if not for participating in the Seed Gardeners project. 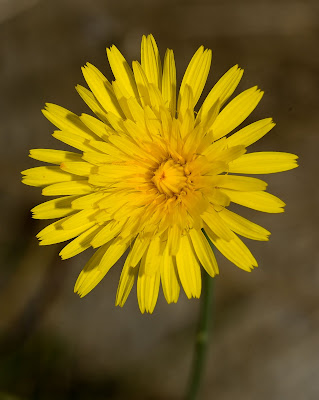 While it's not my favorite native in our garden, I'm happy to grow it for the Seed Gardeners project. It's a good feeling, knowing the seeds help restore native habitat in our area.

Knowlege is power. We can make a difference by educating ourselves and voting every day with our wallets. Together we can push to the tipping point what may be one of the most pressing health issues of our time. For the health of our children and their children, if you haven't already, please educate yourself and share your knowledge with family and friends. For more information please visit The Institute for Responsible Technology. 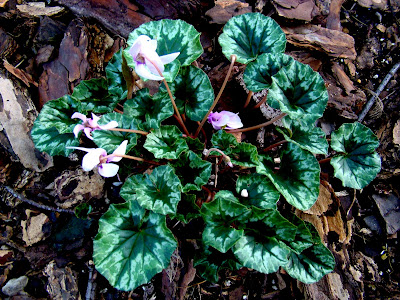 Here in zone 5a, our first average frost date is October 15. The last two years we haven't had frost until mid-November. Although we're on borrowed time and the weather has taken a chillier turn, there's been no frost yet. The hardy cyclamen is still blooming, and its foliage is up now too. Aren't they pretty! 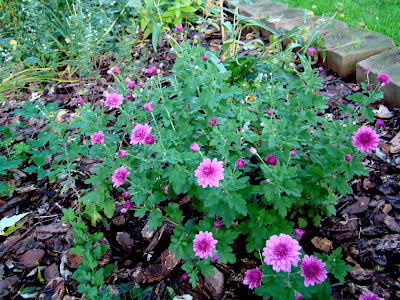 We have good luck with mums coming back year after year if we plant them in spring. These were added in spring 2009. This year they were pinched in May and July. A few new ones were started by sticking a few of May's cuttings in the ground. Six cuttings rooted, and they're blooming now too. 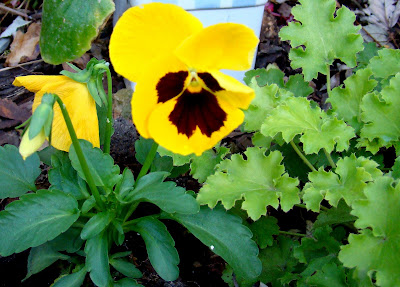 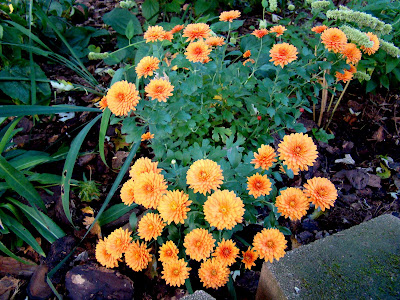 Here's another mum planted in spring last year. This one flopped as mums are prone to doing, in spite of being pinched in May and July. The blooms are still welcome even if the plant isn't perfectly shaped. This year, Liquid Fence is doing a good job keeping the blooms coming. Last year the bunnies ate them as quickly as they opened. Love 'em or hate 'em, mums add color to the garden at a most welcome time of year. They're easy-care, easy to start from cuttings, drought-tolerant, and bloom well in full or part sun. Ours get less than three hours of sun a day and still bloom beautifully. 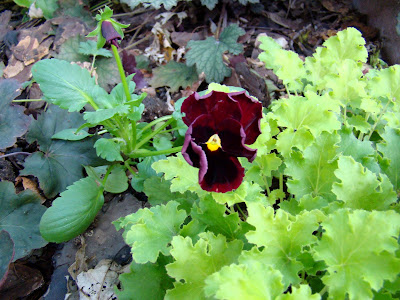 Here's another pansy just opening up. 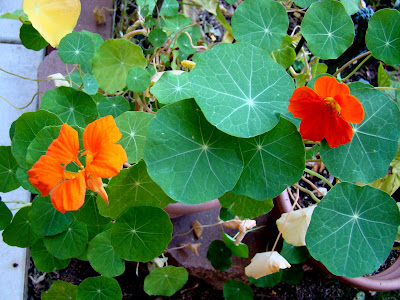 The nasties seem to like the cooler weather. They still aren't blooming very prolifically, but look - two blooms at once! I've given up on removing the yellow foliage. 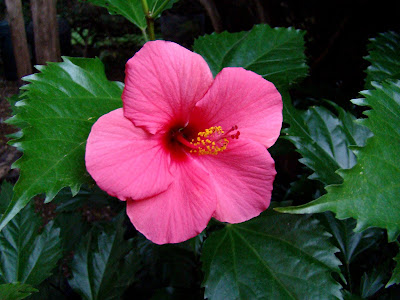 The tropical hibiscus has a lot of buds, and this one opened just in time for Bloom Day. 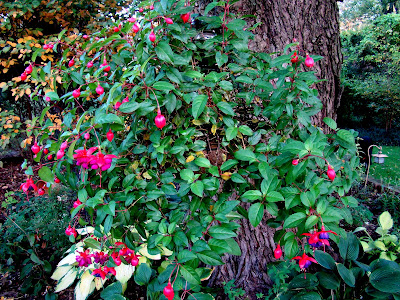 It's been about two weeks since we've seen a hummingbird. The fuchsia helped attract them all season. Fuchsias have been challenging to overwinter, but I'll try again this year. I think I tend to over-water them after they come indoors. They like moist soil, but not too moist. 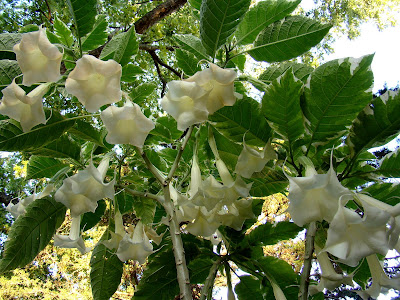 Last but not least are this month's most magnificent blooms. The patio smells like heaven. Last year the angel's trumpet didn't bloom at all. This year it was moved around until a spot on the patio was found where it got almost full sun. This is the second time it bloomed since finding this spot. The first time it had seven or eight blooms. This time it has thirty - more blooms than ever. In the past two weeks as the sun drops lower in the sky, it's getting just a little sun in the morning, but it's ok. The buds were formed while it was still getting lots of sun, and it will soon be coming indoors for the winter.

There are still lots of annuals blooming here, along with 'Autumn Joy' and 'Matrona' sedums, 'Happy Returns' daylilies, calamint, 'Rozanne' geraniums, 'Autumn Bride' heuchera, and a few sporadic phlox, coneflower, aster, and rudbeckia blooms.
To see more October blooms in gardens across the country and around the world, please visit our gracious Bloom Day host, Carol at May Dreams Gardens.
Posted by garden girl at 10/15/2010 05:00:00 AM 31 comments: 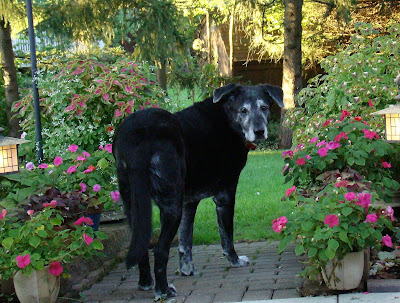 Just before Christmas, George will turn ten years old. He's definitely not a puppy anymore. In the last three years he's developed some health challenges, including hypothyroidism, unhealthy weight gain, and chronic staph skin infections. His hip dysplasia and arthritis have worsened. He walks with a pronounced limp, gets up and down from a reclining position, and on stairs with difficulty. He's shortened his stride with his back left leg, and had developed considerable swelling and atrophy in his left hip.
I've done a lot of research on geriatric pet health in recent months, and was pretty mortified about what I learned about most commercial pet foods. In an effort to improve his quality of life for however much time he has left with us, George recently visited a holistic veterinarian. We're in the process of transitioning his diet from commercial dry kibble to a homemade grain-free and raw diet. He's now enjoying a smorgasbord of homemade lightly-steamed turkey, dark green vegetables, sweet potatoes, raw eggs, water-packed sardines, wild salmon, fish oil, (raw, organic, unrefined) extra-virgin coconut oil, glucosamine and chondroitin, a high-quality prepared commercial raw dog food, and a blend of Chinese herbs targeted to improve the condition of his liver, joints, and skin. 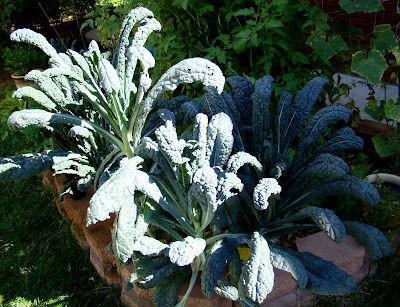 This year we grew dinosaur kale in the garden. Early in the season I realized it didn't agree with me, so I've just been letting it grow, enjoying it's wonderfully crinkly blue-green leaves.
Since starting to grow veggies here two years ago, George has enjoyed keeping me company while I work in the beds, especially when I'm picking peas and green beans - two of the veggies, along with kale, that his new vet has recommended. He's been enjoying peas and green beans in season, picked fresh and served immediately. Little did I know when I planted all this kale that I wouldn't be able to eat it, but that it would help George get healthier.
In three short weeks since beginning to modify his diet, George's skin infection is gone, his fur is growing back, his coat is shinier, he has more energy, he's taking longer strides, his hip swelling has gone down considerably, he's even enjoying exercise again, and he's losing his excess weight. He's a lab mix, and being a retriever, he's always loved chasing sticks, balls, frisbees, and his stuffed toys. We haven't been able to play with him like that in the last couple of years - he would get too sore and stiff.
In just the last week or so, he's back to running around, chasing his toys, and enjoying a whole new, more active, less painful, and more fun life. He gets up and down more easily, and seems to be on his way to much healthier days ahead. We're looking forward to a better quality of life for however long he has left, maybe even a longer life than he might have had if we'd continued his old diet, and hopefully much lower vet bills than he's had the last couple of years.
It never occurred to me when starting the veggie beds that George would also benefit from our fresh, organic produce, or that the kale I planted this spring that seemed as if it might go to waste, would become part of what was needed for improving our sweet doggie's health and quality of life. 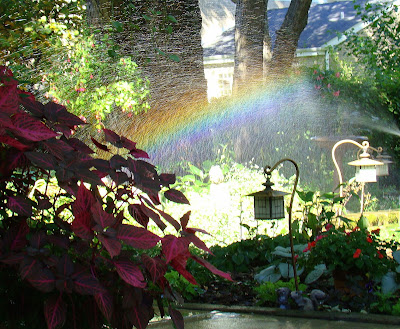 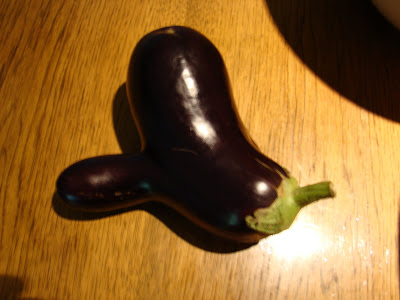