With so many wonderful, passionate garden bloggers in the Chicago area and throughout the state, I'm honored, grateful, and nearly speechless that Garden Girl was voted 2009's best Illinois garden blog by the Blotanical community.

The past several months have offered little time or focus for blogging and blog visiting. I've missed regularly interacting with garden blogging friends. That makes this honor even more special, and even more humbling.

Hugs and Congratulations to Rose, Carolyn Gail, Cathy, and Stacy for your nominations. I'm privileged to be in the company of such talented and genuinely awesome women.

Thanks to all who voted, and congratulations to all who were honored with this year's nominations and awards.
Posted by garden girl at 9/30/2009 11:50:00 PM 29 comments:

Carol at May Dreams Gardens tagged me for this meme a little while back. The idea is to reveal seven random things about yourself your readers may not know. I did a similar meme last year, and had to ruminate a bit to come up with a few more.

Without further ado, here are my seven things: 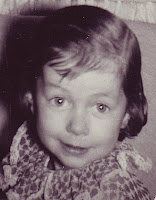 1. I'm a lefty. On the last day of kindergarten the teacher insisted Mom must train me to be right-handed over the summer. Mrs. Meyerbach was a seamed-stocking, orthopedic-shoe-wearing, old-fashioned, kind, yet authoritarian throwback to the days when left-handedness was believed to be sinister. Fortunately Mom disagreed, reassured me there was nothing evil about being left-handed, and sensibly allowed me to be myself, left-handedness and all.

2. I learned to sew, crochet, and embroider as a child, but never learned how to knit. Mom tried to teach me, but I could never quite figure it out, probably because I'm left-handed. ;)

3. One of my maternal great-grandfathers was a cantor at the synagogue, and sang in the NY Metropolitan Opera. One of his sons was a Broadway, Hollywood, television commercial, and industrial film actor. I didn't get the performer gene from them - don't like being the center of attention. 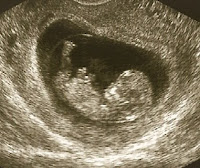 4. I'll be a grandma for the second time early next year. K, the oldest and her husband are expecting their first child. We couldn't be more thrilled. The ultrasound photo is several weeks old, and mama and baby have both grown since then. ;) 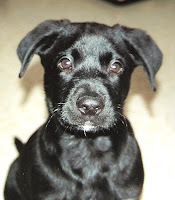 6. For as long as I can remember, I've had a fear of heights. As a child I had recurring dreams of falling down the stairs, and of flying like a bird (just get a running start and flap your arms.) You won't ever catch me on the new Willis (formerly Sears) Tower Ledge. I've never been able to perfect flying, but have fallen down the stairs a few times - sprained an ankle once, and cracked my tailbone another time. The tailbone incident happened when George was a puppy and I tripped over him on the stairs. After that I always made sure he went down the stairs ahead of me.

7. Besides my family and close friends, one of the people I've always admired most was a girl I knew in grade school. She was always kind. I never heard her say a bad thing about a single soul. When the kids at the bus stop started trashing someone, she had a graceful way of putting a stop to it without alienating the mean kids or making them feel threatened. When the kids on the playground made fun of the kids in the special-needs class, she found a way to stop it without becoming a target herself, and she made friends with the special-needs kids. She had a special kind of courage and a special kind of grace. After high school I never saw her again, but I'll always remember and admire her.

One thing you may already know about me is I'm not big on rules. So rather than tag anyone I'm issuing an open invitation for anyone else who hasn't been tagged yet and wants to play to post seven things about yourself your readers may not know.

This is the last Bloom Day of Summer, 2009. The days are getting shorter and the nights are getting cooler, but there are still lots of late-summer blooms in the garden. 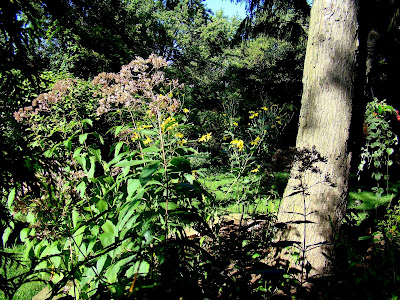 Joe Pye weed is still blooming, along with Herbstsonne rudbeckia seen in the background. 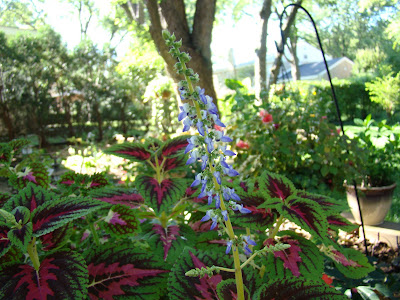 Sometimes I pinch off the coleus flowers, but they are kind of pretty when I don't. 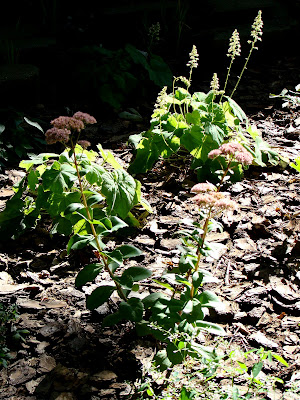 I love the light this time of year. With the sun lower in the sky the garden's a bit sunnier than it is most of the summer. It's not always the best light for photos, especially not in the afternoon when these photos were taken. But it's so shady most of the time, I decided to take some sunny photos anyway. Sedum 'Matrona' is in the foreground. Behind Matrona and new to the garden are 'Autumn Bride' heucheras. I picked one up on sale last fall, and divided it into multiple pieces before planting. 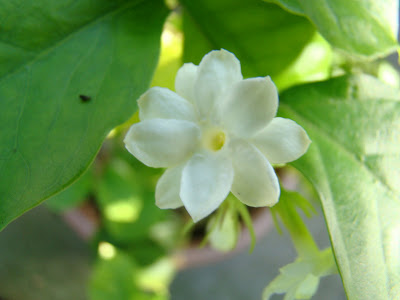 The jasmine will be coming indoors soon. In the meantime it's blooming on the patio, smelling wonderful. 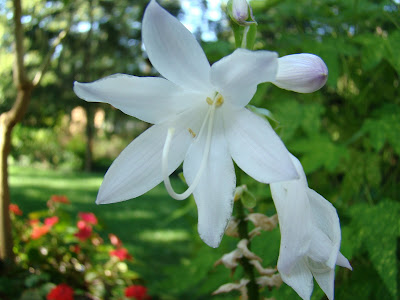 Another wonderfully-scented late-summer bloomer is this hosta. They're just about finished, but the hummingbirds and I are enjoying their last hurrah. 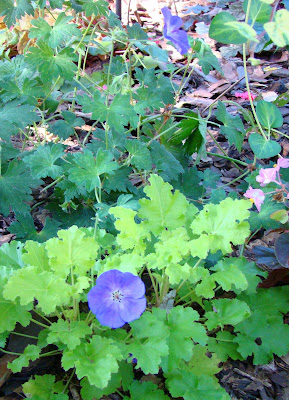 Geranium 'Rozanne' is a sprawler. I'm not complaining. Any perennial that blooms from spring to frost even in mostly shade is welcome here. I think Rozanne is pretty sprawling into Lime Rickey. 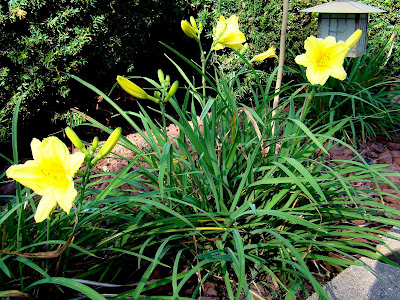 Happy Returns daylilies normally bloom off and on all summer. They bloom for a few weeks then take a rest and bloom again. This year they bloomed non-stop all summer. 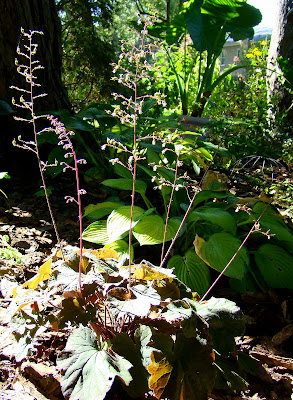 This heuchera, a villosa called Mocha, has bloomed all summer too. I enjoy the light, airy blooms. They practically glow in the late afternoon sun that slips under our canopy of shade in late summer. 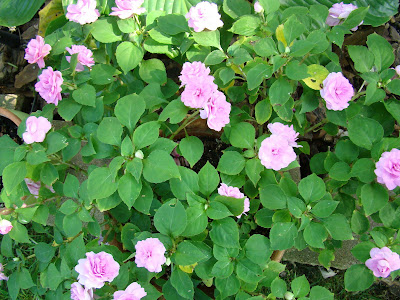 Double impatiens have bloomed all summer too. This one's from cuttings from last year's plants. 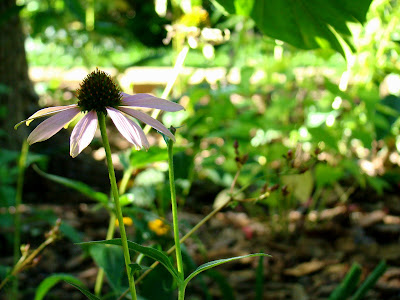 My favorite coneflower is still blooming. There's another plant just like this one. Both were started from seeds. Both have these nicely-shaped blooms that stay fresh a really long time. 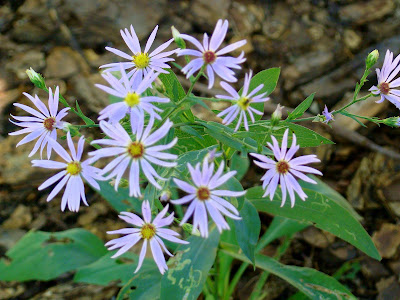 Smooth blue asters (Aster laevis,) are natives. Three of these were added to the garden this spring. Their foliage held up all summer, better than asters I've had in the past. Recently though, leaf miners have been having a field day with them. 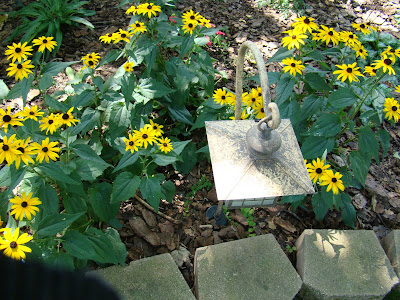 The Susans are starting to fade in other spots, but this group is more shaded and they're still looking nice and fresh.
Catmint, calamint, more heucheras, a bunch of sedums started from cuttings last fall, coneflowers, and lots of annuals are all still blooming too.
Thanks to Carol at May Dreams Gardens for hosting Garden Bloggers' Bloom Day. Be sure to visit her blog to see what's blooming today in gardens around the world.
Posted by garden girl at 9/14/2009 09:30:00 PM 20 comments:

We had lots of good family times this week with the Middle One visiting from DC. Her paternal grandma lives not far from Lake Katherine. On Labor Day after driving her to Grandma's for a cookout, I borrowed the Little Guy from my youngest daughter. We headed to Lake Katherine for some fresh air, sunshine, and exercise on what was a beautiful late-summer day.

I've volunteered there a couple of times this season, but didn't have time to take any photos. It looks quite different there now than it did back in March!

I've done a slide show again since there seemed too many photos to cram into this post. Enjoy! 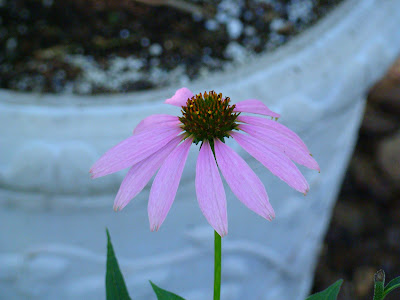 This pretty little coneflower is not like the others here. There are two of these. They may have come from a wildflower seed mix the Lawn Man started a couple of years ago. They're deeper pink, the foliage is smaller and narrower, the plants are shorter, the cones are flatter, smaller, and brighter, and the slightly toothed petals are narrower than Echinacea purpurea. Instead of the typical shuttlecock coneflower shape, the petals are more horizontal. The plants are nicely upright even with very little sun.

Earlier in this garden's life, a few different echinacea cultivars were tried. Most of them didn't make it through their first season. The only ones left from those days are one 'White Swan,' and one 'Magnus.' They seem happy enough here, but I'm not impressed with them in our shady garden. White Swan is more off-white and kind of dull, and Magnus' petals are even paler than purpurea's.

With underwhelming results from cultivars in our garden, I gave up on them and last spring started Echinacea purpurea from seed. With more plants than I could use from a $2 pack of seeds, about half were shared with K, my oldest daughter. The rest have been happy here along with the remaining White Swan and Magnus, and the two mystery coneflowers.

The finches, squirrels, and I are all happy Echinacea purpurea grows well here, pleased one 'White Swan' and one 'Magnus' decided to hang tough, and thrilled these unnamed coneflowers are happy. Whatever they are, may they be fruitful and multiply.
Posted by garden girl at 9/01/2009 06:06:00 PM 22 comments: