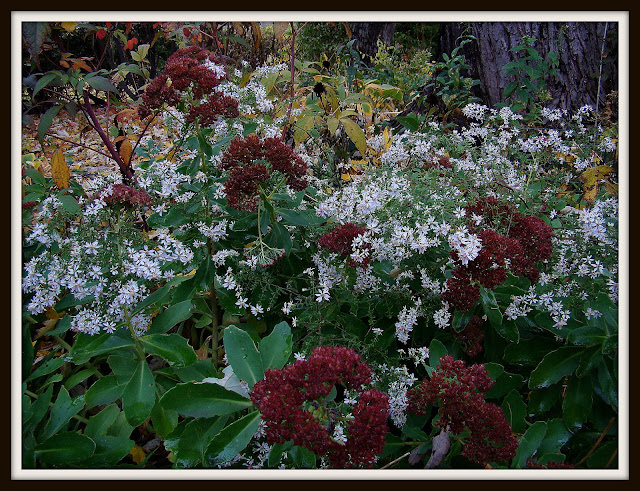 Of course, 'Autumn Joy' sedum isn't a wildflower, but the sweet little pale lavender-pink asters are.  They're the last native plants left blooming in our garden, and they just burst open this week.

I'm not even sure which aster this is, but my guess is Aster lateriflorus, or if you like those newfangled botanical names,  Symphyotrichum lateriflorum, or if you're like me and find the common names more romantic, fun, easier to pronounce, and so much friendlier, calico aster.

Like many asters, this one likes to sprawl.  I moved it behind the sedums last fall, thinking they might give it a little support.  They do, and I like how the contrasting blooms and foliage are mingling together - a happy accident, don't you think?

To join in this monthly celebration of wildflowers blooming in gardens all over, please visit Gail at Clay and Limestone, where she's featuring tiny asters too; with wonderful photos of the pollinators that love these native autumn blooms.
Posted by garden girl at 10/24/2012 06:12:00 AM 19 comments: 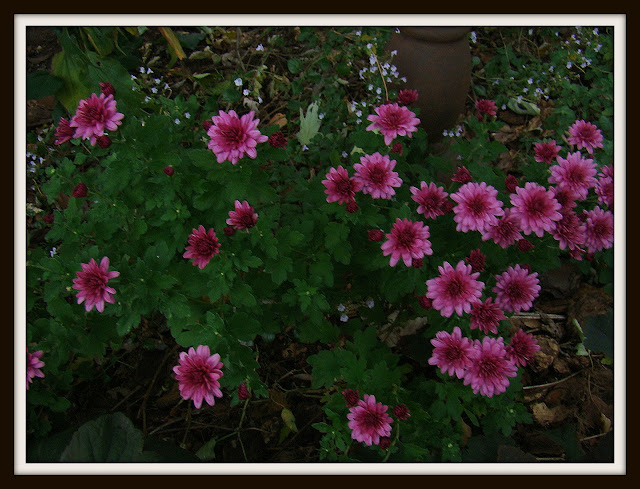 Blooms around here in October are getting fewer, and further between.   We haven't had frost yet, and there's still some color in our garden.

These mums were planted in spring three years ago, and they've returned each year.  Planting them in spring helps with hardiness.  Their roots get established and they're less likely to heave in winter.  We think it helps not cutting them back in the fall too.  Stems cut back in fall tend to hollow out and soak in moisture that can rot the roots.  In our garden most things don't get cut back until spring.  Fallen leaves tend to collect around the stems this way too, and that helps insulate and protect them until spring.  That's calamint blooming behind the mums. 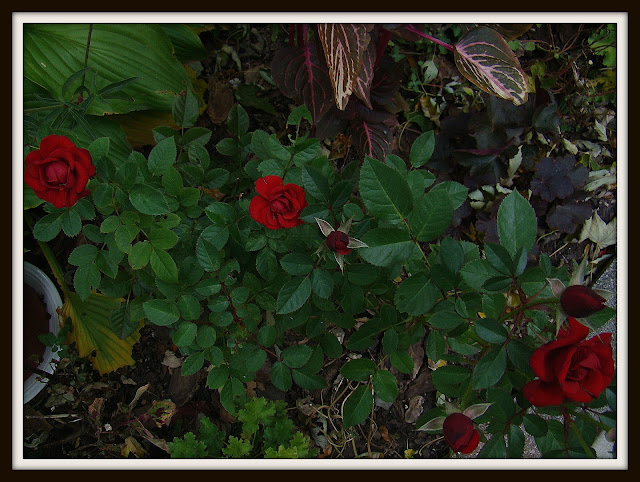 Our mini-rose has been blooming continuously all summer.  It's never done that before.  A couple of years ago it even bloomed through an early-December snow. 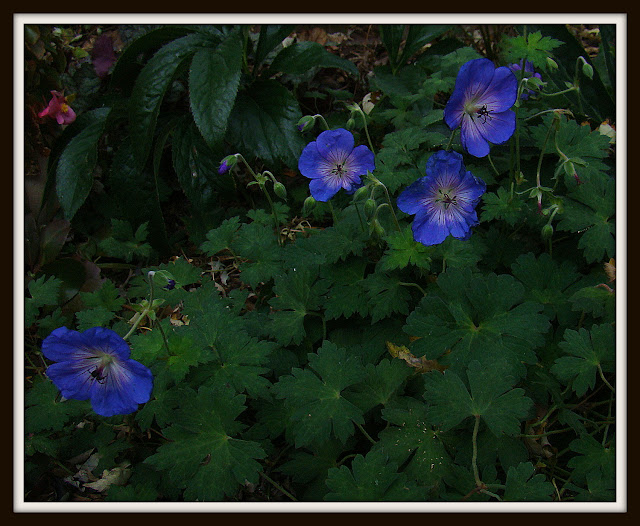 'Rozanne' has slowed down some, but she keeps blooming until frost gets her. 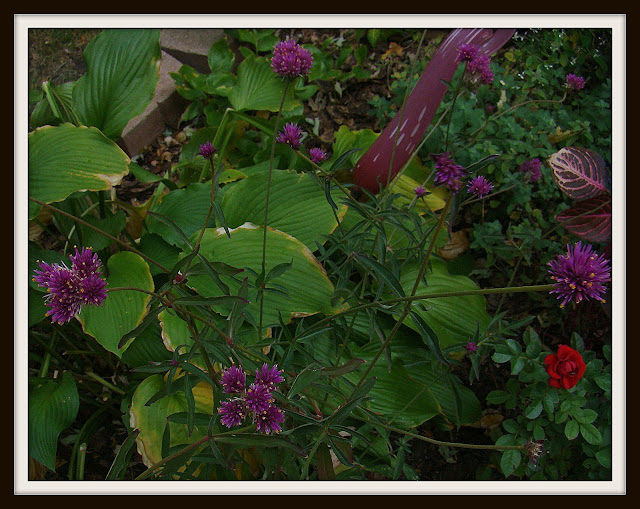 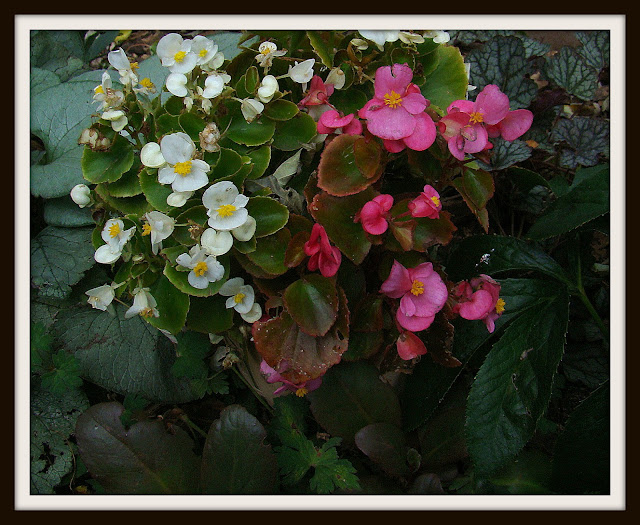 Next year the lowly wax begonia will likely replace impatiens here.  I'm tired of watering impatiens, and most of them succumbed to downy mildew this year  - not only in our yard, but all around the area - both the singles and the doubles. 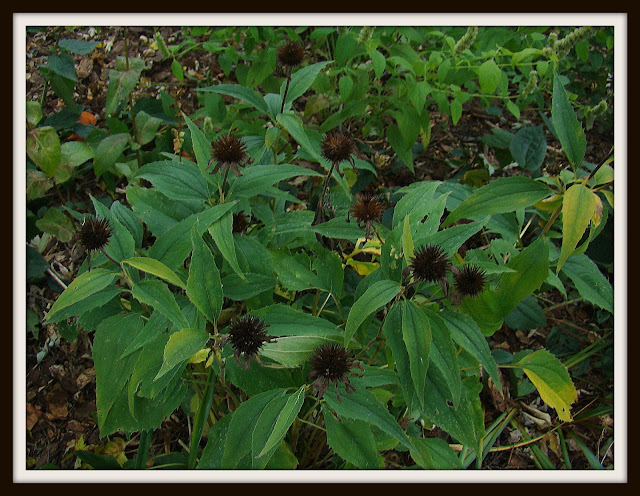 They're not flowers anymore, but the brown balls Previously Known as Coneflowers will make good food for the critters around here well into late fall.  It's not unusual for squirrels to bite them off and carry them away. 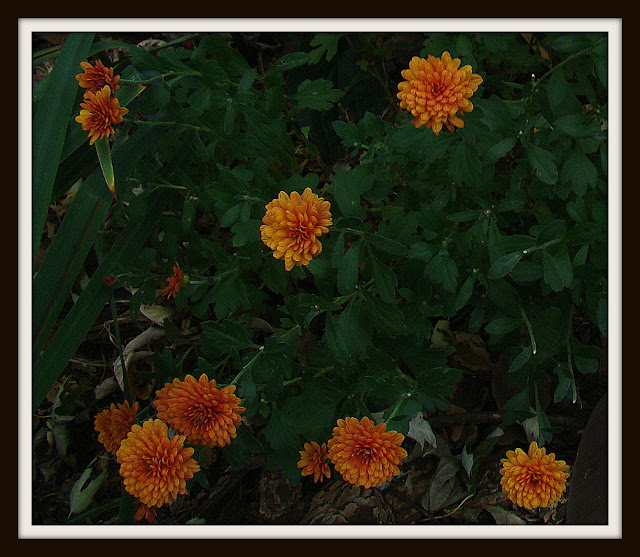 You may be able to see the work of critters here  on these mums.  Most years rabbits eventually eat all the mum blooms. 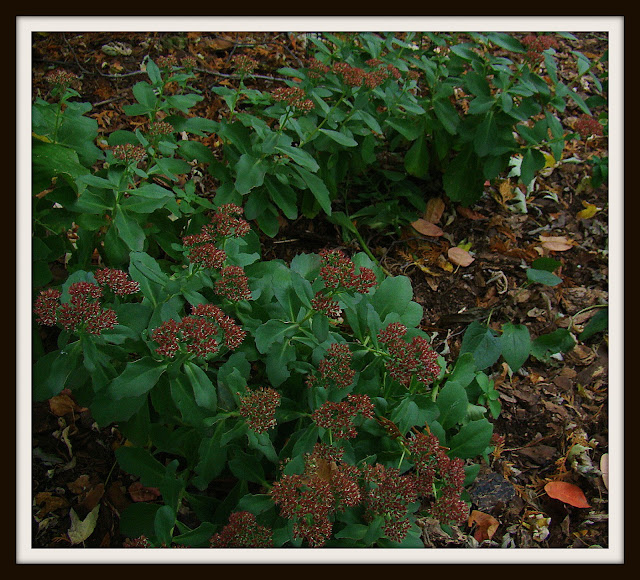 This group of sedums gets just a little afternoon sun.  If I didn't pinch them early in they season they'd be flopping all over, but don't let anyone tell you sedums are just for full sun.  They're great in dry shade,  and pollinators love them in our garden.  This is a spot where many other plants, both natives and cultivars, have been tried and failed.  Here, the roots of silver maples, a serviceberry, and a hedge of mature arborvitaes all come together, and this spot is dry, dry, dry.  But the sedums don't mind at all. 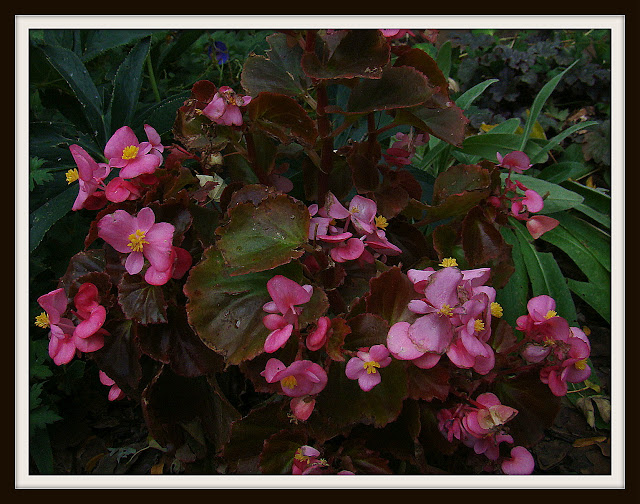 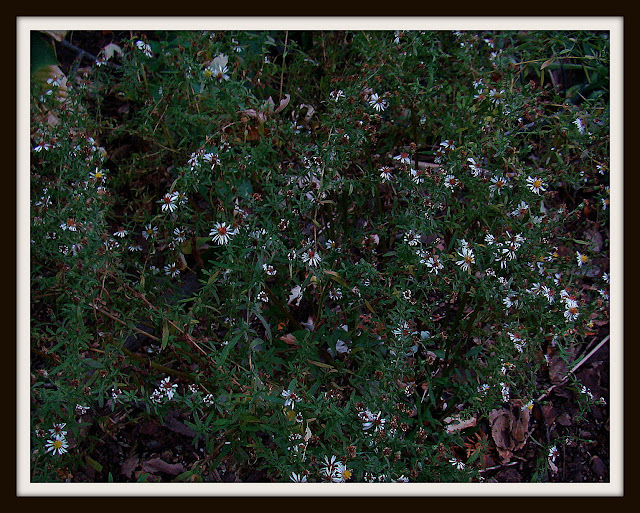 I'm not sure which asters these are.  I do know pinching them a couple of times in late spring and early summer helps keep them from getting leggy and floppy. 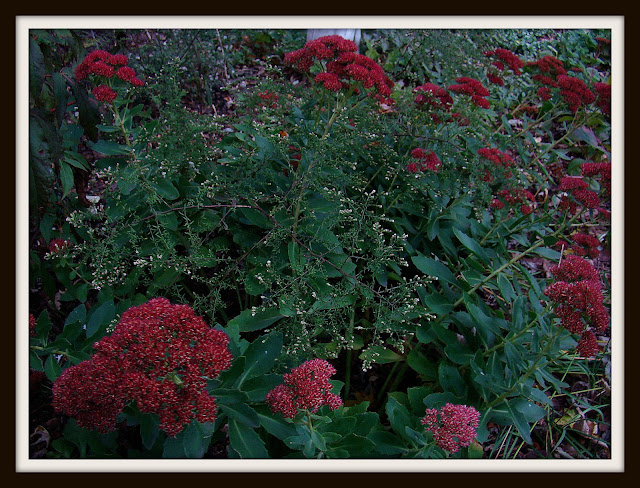 This bunch of  'Autumn Joy' sedums got pinched too, even though they get a little more sun than the others. Pinching back tall sedums once or twice early in the season really does help with floppiness.   Another NOID aster mingling with the sedums is just about to bloom.  This one has teeny white blooms too, but it's got a slightly different form from the one pictured earlier, and it blooms later. 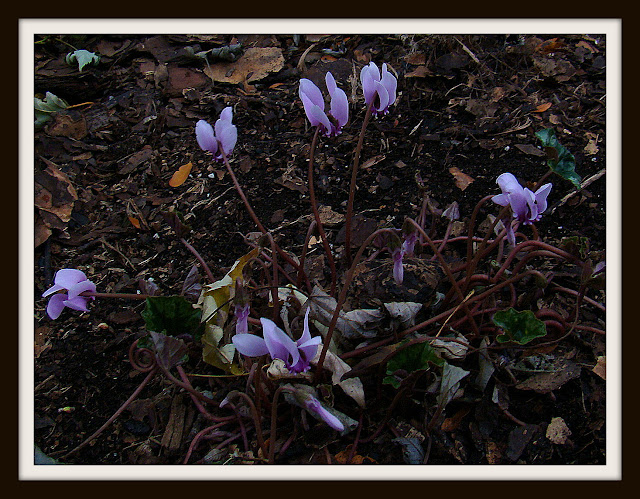 The last hardy cyclamen left is blooming, but not as prolifically as in previous years.  The other two seem to have dissapeared. 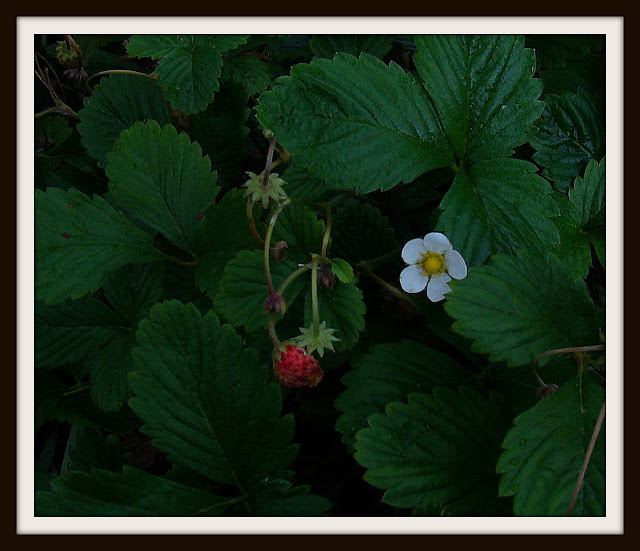 Every two or three days since late spring, I've been enjoying a little handful of these heirloom French strawberries.  I started them from seeds from Renee's Garden two springs ago.  The flowers are cute, the berries are delicious, and the plants form pretty mounds.  They can be divided, but there are no runners on these strawberries.  They produce a nice little crop all season long, even in just part sun. 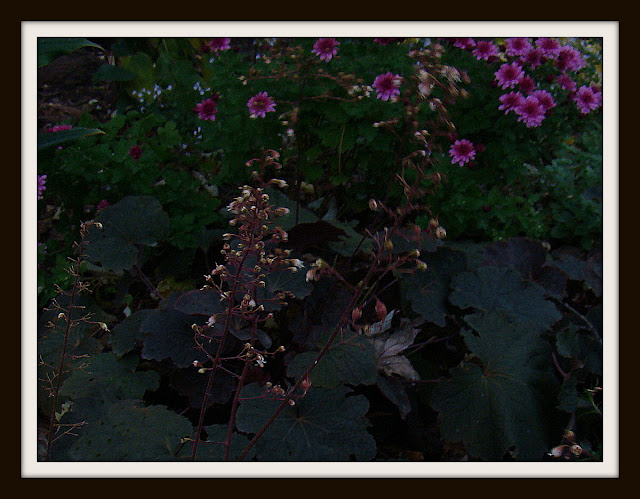 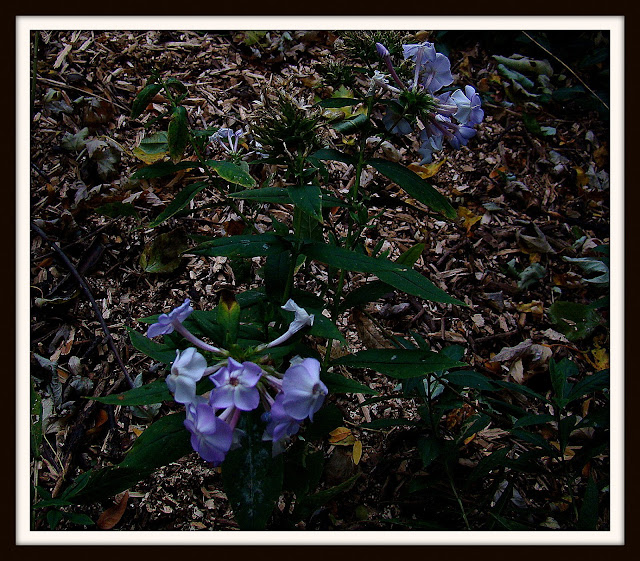 This is the latest I can remember still seeing phlox blooms around here.  This one's a NOID from a fellow Master Gardener.  Chocolate Joe Pye weed was also blooming in our garden, until something stepped on it last week and broke the stems.

After a very hot, very dry summer, October's been chilly.  It feels more like November than early October.  While we haven't had a frost or freeze yet, all the tender plants came in last weekend just to be safe.  I'm always glad when that task is done!

In spite of the drought, fall colors have beautiful.  And this weekend we had the first substantial rain here    since early August.