It's hard to believe it's already November 15th, and time once again for Bloom Day. Frost finally arrived here nearly a month later than average, covering the front and back lawns but sparing the shade garden. In its protected microclimate, even with a low of 29 degrees earlier this week we still have outdoor blooms. 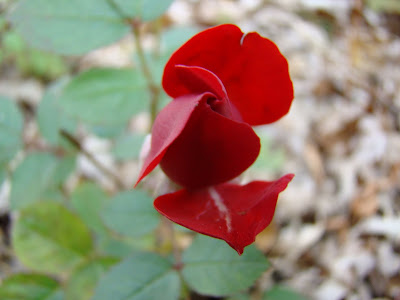 This is the same mini-rose bud shown on October's Bloom Day post. With our cool weather, a full month later it's just beginning to open. 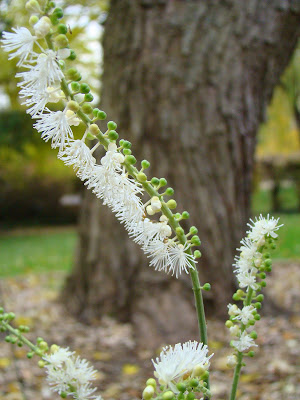 Renamed Actaea by the official plant-naming powers-that-be, I still prefer Cimicifuga. Ours is a late bloomer in its third year. With a late frost last fall too, we enjoyed blooms for the first time. This plant is a slow grower, but has twice the blooms this year as last. 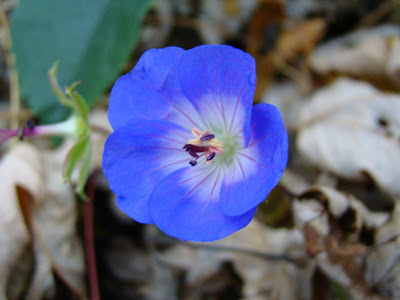 Geranium 'Rozanne' blooms May to frost in our garden. They've slowed down, but are still blooming in November. 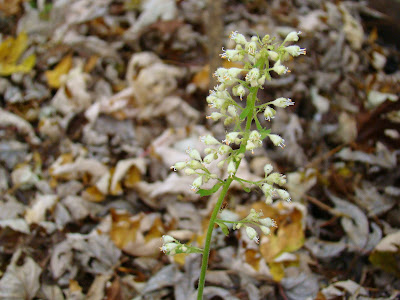 The last three years, I've become a heuchera nut - can't seem to get enough of them for their colorful foliage. Most of ours are evergreen. I love the year-round color and interest they add to the shade garden. Some become rodent food over the winter. By early spring the rest begin to look tired and are cut back to stimulate fresh new growth. Heucheras are grown in our garden primarily for their foliage. The tiny, airy blooms are a bonus. Most of the them are done blooming for the year, but Autumn Bride and Mocha, both villosas, are still going. This one's Autumn Bride. She began blooming in August. Mocha has bloomed continuously since June. 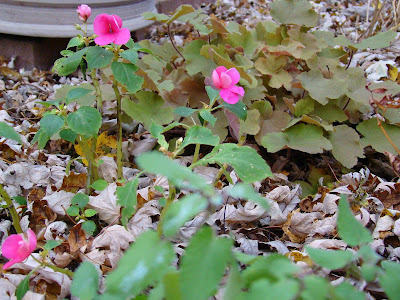 Even a few tender annuals are still blooming, like impatiens, 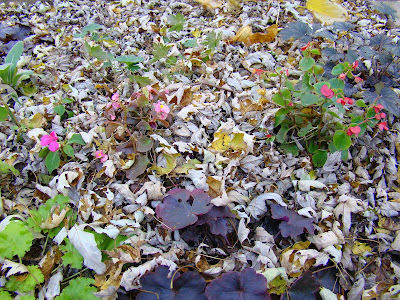 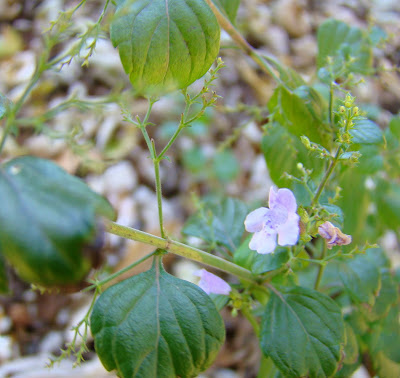 Calamint is a long bloomer in our garden. It started in June and still has a few tiny blooms in November. The plants grow naturally into a beautiful round shape. They have a pleasant scent, a profusion of these tiny blooms, and the glossy, dark green leaves stay fresh and unbothered by pests all season. 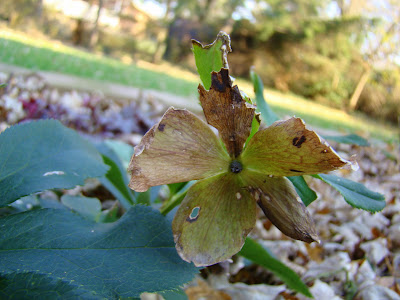 Ok, I admit it's a shadow of its early spring beauty, but the fact that this hellebore, budded in February, blooming in mid-March, has retained its blooms through Mid-November is nothing short of remarkable. It has earned its place in this Bloom-Day post. The hellebore was added to the garden two springs ago. This year two more varieties were added. Being my first hellebore, I'm curious dear readers. . . Is this one unusual holding its blooms so long, or do yours retain their blooms so late in the season too? 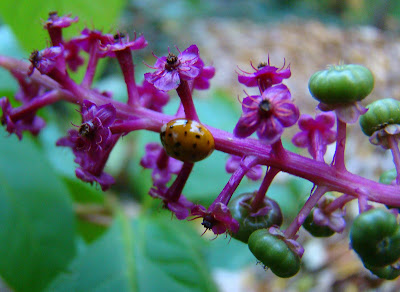 Discovered growing in the wayback wilderness just a few weeks ago, the jury's still out on pokeweed. I love the red stems and the blooms. Being a native plant doesn't necessarily mean it won't become invasive though. Will I regret leaving it there to drop seeds? I'd love to know your views on this plant - leave it or dig it out? 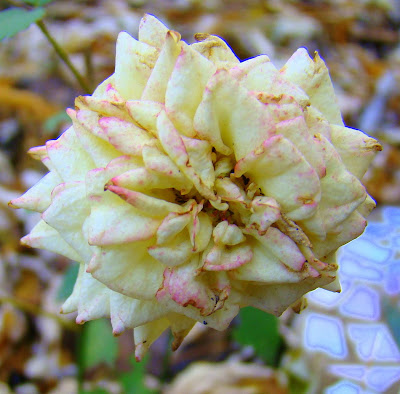 Holding on for over a month in our cool weather, this yellow mini-rose bloom has aged gracefully. 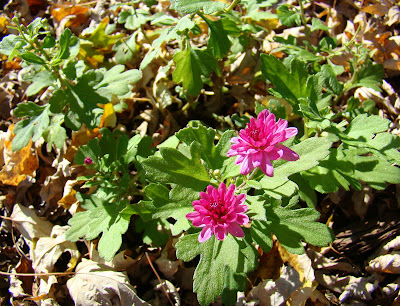 This mum was covered with blooms a couple of weeks ago. All but these two were eaten by varmints. 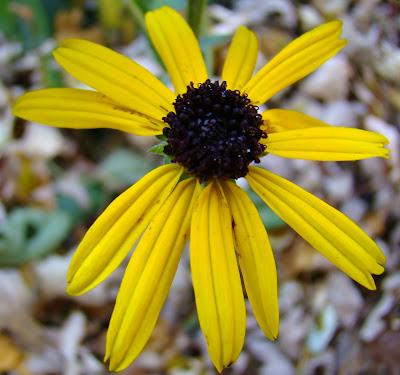 Last but not least is one of our favorites. The Lawn Man likes yellow flowers. Susans churned out blooms since July in our shady garden. While most are now seedheads providing late-season food for suburban wildlife, a few fresh blooms are still adding color here and there.


By next Bloom Day it's unlikely there will be any blooms left in the garden. Hopefully overwintering indoor plants will pinch hit until spring returns to the Chicago area next year. Happy Bloom Day everyone, and thank you Carol at May Dreams Gardens for hosting the monthly parade of garden bloggers' blooms.
Posted by garden girl at 11/15/2009 05:25:00 AM 37 comments:

Thank You Grandma, Grandpa, and Mom

Thank you Grandma and Grandpa, for this beautiful birthday gift. Thank you for letting me be your little princess. It's humbling knowing the tragedies and challenges both of you and our family faced, that my coming into this world brought you such joy and hopefulness.

Thank you for loving each other so much, and for sharing your love with me. Thank you for the blessings you bestowed upon me. I've done my best to live up to your hopes and dreams for me. I will always love and remember you both.
Thank you for blessing me with the best Mom any child could ever ask for.
Thank you Mom, for giving me Life. Thank you for your love, acceptance, and support, and for all you've done for me throughout my life. And thank you for saving this beautiful letter for me. It will always be one of my most treasured possessions. I love you.
Posted by garden girl at 11/09/2009 05:00:00 AM 28 comments: 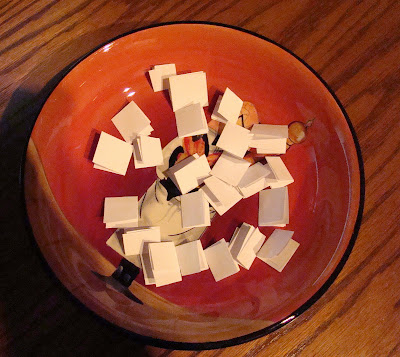 Thanks so much to all who participated in the drawing for a copy of Flora Mirabilis, the new National Geographic book on plants.

To assure the drawing was fair and unbiased, my spouse, a/k/a Lawn Man, drew the winning entry.

Thank you to everyone who entered the drawing. I'm confident you'll all enjoy this terrific book. It's worth owning for the rare, never-before-published illustrations alone, and the narrative is utterly absorbing as well. A quote from the book jacket expresses its value well: "Flora Mirabilis is as much a tale of adventure as it is a fascinating celebration of botanical discovery and delight." I encourage you to check it out.
Posted by garden girl at 11/08/2009 07:10:00 AM 5 comments: 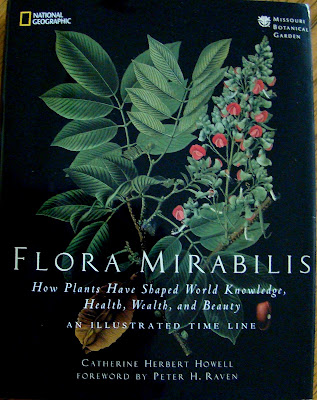 Flora (noun, Latin) 1. A treatise on or list of the plants of an area or period.
Mirabilis (adjective, Latin) 1. wondrous, extraordinary.

National Geographic was a staple in our home as the girls grew up, with a subscription to the magazine an annual Christmas gift from their paternal grandmother. The Society's books have been welcomed into our home, eagerly read, and referred to often as school reports and term papers were written. Some still grace the shelves of our home library, while others went with the girls as they moved out on their own.

I'm fascinated by the history of plants, and have always loved botanical illustrations. Imagine the thrill being offered a free review copy of the new National Geographic/Missouri Botanic Garden collaborative book Flora Mirabilis - How Plants Have Shaped World Knowledge, Health, Wealth, and Beauty - An Illustrated Timeline; authored by Catherine Herbert Howell.
This is a gorgeous volume, printed on heavy stock and filled with over 200 rare botanical prints from the MOBOT collection. Examples can be seen in this gallery of top ten plants that shaped the world.

With a forward by the president of Missouri Botanic Garden and an introduction by the director of its library, the book contains a wealth of information on how plant explorations and botanical passions have shaped human history and culture. Flora Mirabilis would make a wonderful addition to your own library, or a thoughtful gift for any plant lover on your holiday list. It's available through booksellers everywhere.
I'm excited to offer a giveaway copy, complements of National Geographic. For an opportunity to win Flora Mirabilis, please leave a comment on this post. This drawing will be open to United States residents today through Saturday, November 7th at 9 p.m. Central Time. (One entry per person.) The winner's name will be drawn Saturday evening, and announced here on Sunday, November 8th.

After the announcement the winner can provide their mailing address to me via email. Flora Mirabilis will be sent directly from National Geographic. Good luck everyone, and remember to check back on Sunday!
Posted by garden girl at 11/03/2009 05:15:00 AM 26 comments: