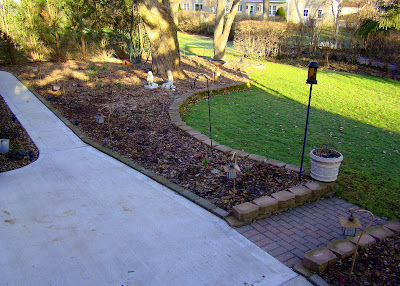 Yesterday the twig was brown and bare;
Today the glint of green is there;
Tomorrow will be leaflets spare;
I know no thing so wondrous fair,
No miracle so strangely rare.
I wonder what will next be there! ~
L. H. Bailey 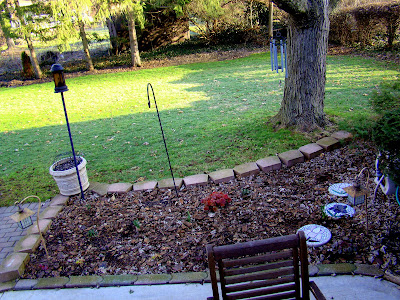 Behold, my friends, the spring is come; the earth has gladly received the embraces of the sun, and we shall soon see the results of their love! ~
Sitting Bull 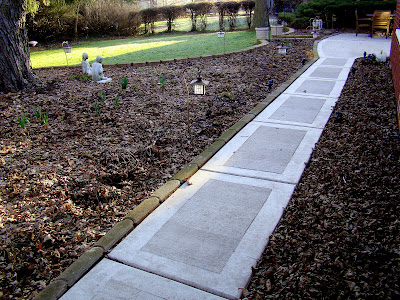 The last fling of winter is over ... The earth, the soil itself, has a dreaming quality about it. It is warm now to the touch; it has come alive; it hides secrets that in a moment, in a little while, it will tell.~
Donald Culross Peattie 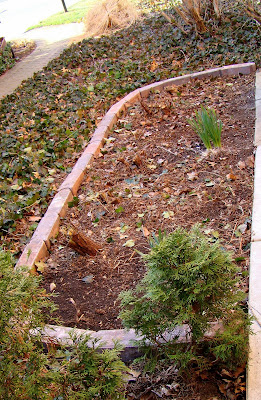 This long, narrow space in our east side yard was, for many years, home to an arborvitae hedge. In decline the last three years, the ice storms of winter 2008-2009 weren't kind to the ex-hedge. All but three of them were removed last fall.
The neighbor's ivy, which had previously been allowed to roam freely here, was cut back and dug out. A barrier was sunk into the soil to keep it at bay. Regular maintenance will probably be needed to keep it out of the new bed. The clump of daffodils was removed to make more space for veggies. The arborvitae stumps are ugly and take up space, but rotator cuff and biceps tendinitis will keep me from removing them. Leaving them isn't optimal, but since neither the Lawn Man or I are in optimal condition to remove them and since my budget for this bed doesn't allow professional removal, the stumps will remain for now.
The little arborvitae in the foreground was layered from a low branch of it's now-defunct parent a couple of years ago. It's now growing on its own roots after being severed from the parent plant when it was removed last fall. The baby will be moved in the next couple of weeks.
The soil will be loosened and amended, and this new space will be used for growing a few more veggies, and giving a little more flexibility for rotating our 'crops,' a challenge with limited veggie-growing space. Although this space doesn't receive optimal sunlight for a veggie garden, successfully experimenting with a few tomatoes and peppers amidst the ivy last year makes me confident this space will provide more fresh, delicious, organic veggies for our table. 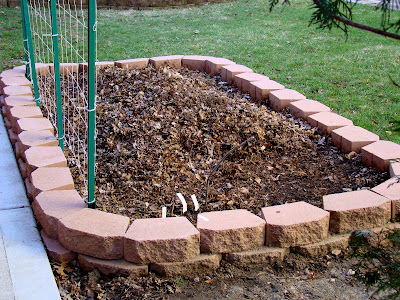 The original veggie bed in our west side yard is ready to go! In honor of St. Patrick's Day last week, the trellis was put in, along with seeds for peas, radishes, lettuce, beets, and bunching onions. After many years without a veggie garden, we're looking forward to our second year successfully growing veggies in part sun with our new veggie space. 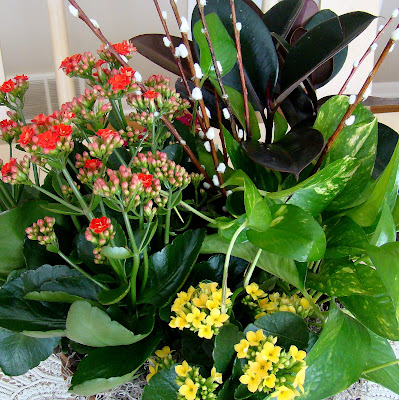 Outdoor blooms are in short supply this month, but we have kalanchoes and Calandiva (double kalanchoe) blooming in this pretty arrangement. 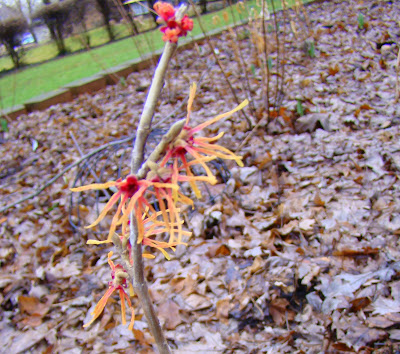 Last year we had hellebores budding in February and blooming by March. Now that the snow cover has finally melted, we have hellebore buds but no blooms yet. What we didn't have last March is Jelena, this baby witch hazel added last May. By the time we got her she was done blooming. Happily she survived the winter and is now putting on her own little show. 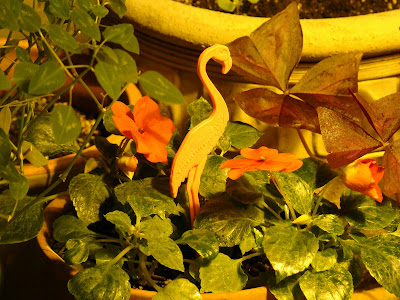 Impatiens seedlings that sprouted in a few containers brought in for the winter have been transplanted into their own pots. I have seeds saved from last year, but with all the volunteer seedlings several pots have been filled, and are already blooming in the basement 'greenhouse.' 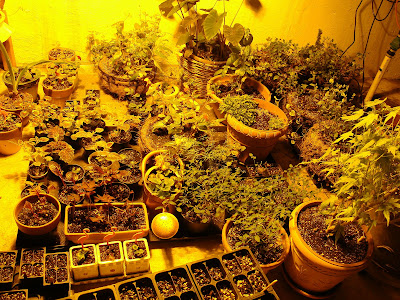 Speaking of the basement 'greenhouse,' there's lots of activity down there - lots of seedlings from Monica's seed swap have been started. Tropical and other tender perennial plants are waiting for warm weather along with lots of other stuff including coleus cuttings taken from last year's plants. There's so much going on down there I can't get everything into one shot, but this will give you an idea. Things are so packed in down there, I have to move stuff to get to everything for watering. Besides the impatiens, there are wax begonia volunteer seedlings, and pelargonium, angel wing begonias, and a sambac jasmine also blooming.
Although it's been damp, chilly, and rainy the past few days, spring is in the air, and the gardening season in Chicago is underway. For more March blooms, please visit Carol at May Dreams Gardens, who hosts Garden Bloggers' Bloom Day on the 15th of each month.

The theme of this year's garden show is "Cultivating Great Performances," and is a tribute to theatre in Chicago. 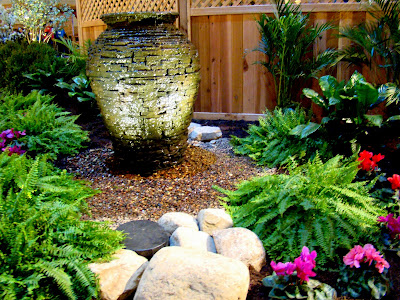 One of my favorite displays at the show is Sun and Moon - Miss Saigon: A Garden For the Day and Night. This is the largest garden at the show. 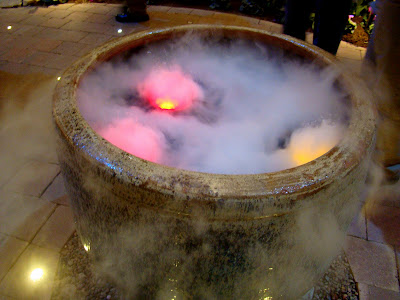 It's meant to depict a suburban backyard, and includes multiple water features and dramatic lighting. 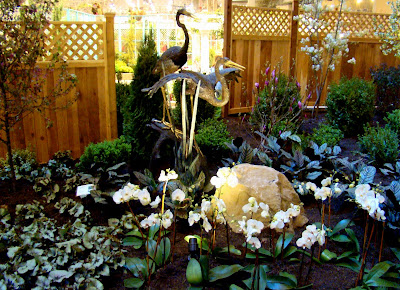 The garden shows how lighting and plant choices can enhance a garden at night. Although orchids might not be the best choice of plant material for a Chicago-area garden, this vignette demonstrates how white blooms can be a beautiful choice for night drama. 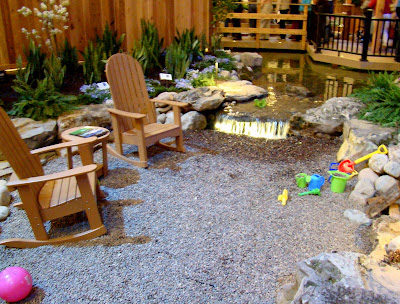 Not pictured here, the garden includes a deck with an outdoor granite kitchen and plenty of seating, as well as an informal play area. 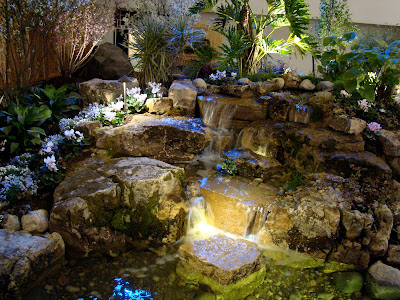 Who couldn't love this waterfall? 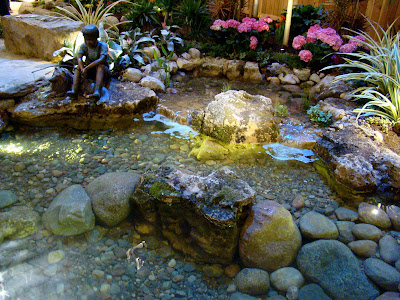 This area was near the exit from the garden. Is it just me, or does someone else recognize the sculpture of the little boy fishing from one of last year's displays? I liked it when I saw it last year, and enjoyed seeing it again, repurposed in this garden.

The 2010 Chicago Flower and Garden Show, running through tomorrow at Navy Pier, is excellent late winter therapy for gardeners and anyone who would love a break from Chicago's dreary weekend weather. 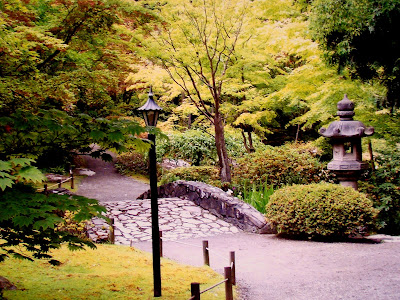 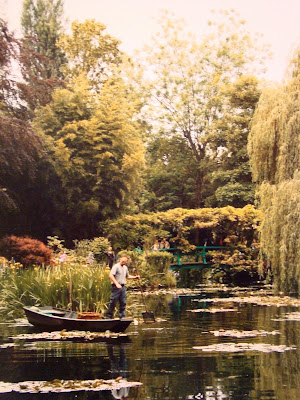 Some of the entries included in this post were prize winners. They're all winners in my book. 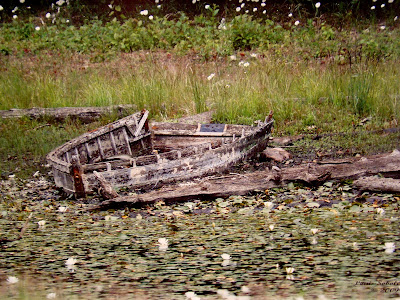 Being one of my favorite painting styles, I love photography with an impressionistic feel to it. 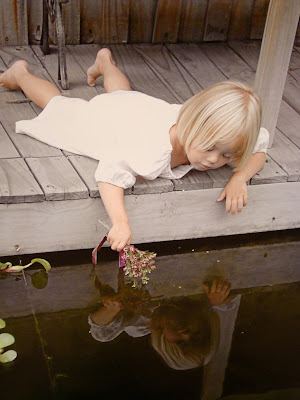 There were so many gorgeous photos, yet it wasn't hard to pick this one as my hands-down favorite.

The Chicago Flower and Garden Show at Navy Pier runs through this weekend. If you live in the Chicagoland area and haven't had a chance to check it out yet, it's not too late! If you enjoy photography, don't miss this exhibit - you won't be dissapointed.