Hi everyone, I'll have more photos after Spring Fling - Since we're getting started so early in the morning and ending late in the evening, it will be hard to find time to do posts during Spring Fling, but I wanted to share a couple of photos of the bloggers attending Chicago Spring Fling. These shots were taken at the Chicago Botanic Garden shortly after our arrival Friday morning.

We arrived at the Garden in two groups, and the Garden's staff couldn't have been more warm and welcoming. They took some photos of the early birds and the later arrivals, and I thought you'd enjoy seeing us all. 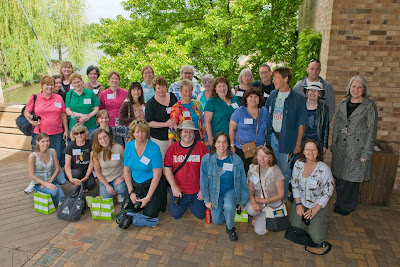 Friday we visited the Chicago Botanic Garden in the morning, and the Lurie Garden in the afternoon. We capped off our day with a reception, where we had a wonderful time visiting and getting to know each other. 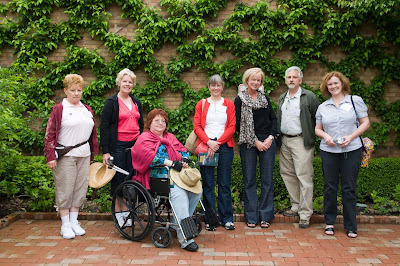 We're having a great time, and I'm looking forward to sharing more later, even if, by the time I have time to catch my breath, Chicago Spring Fling will be a wonderful memory.
Posted by garden girl at 5/30/2009 06:46:00 AM 17 comments: 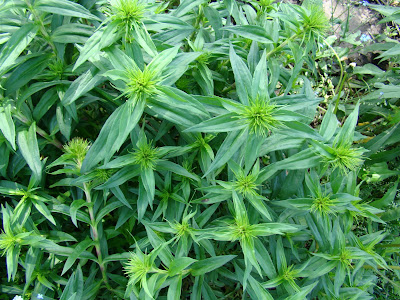 Dianthus? Weed? Or something completely different? I'm stumped, and so are my local gardening friends, including the person who can usually identify plants no one else can.
Maybe if it was blooming I could tell. Or maybe the green buds are actually the blooms? These are in mounded clumps about 18 inches tall, in a garden that does have some weedy areas. We aren't sure whether to leave it or dig it. (These plants were there when the new owner bought the property.)
You can click on the photo to enlarge it. If anyone can help me identify this plant, I'd be most grateful!
Posted by garden girl at 5/19/2009 05:00:00 AM 19 comments: 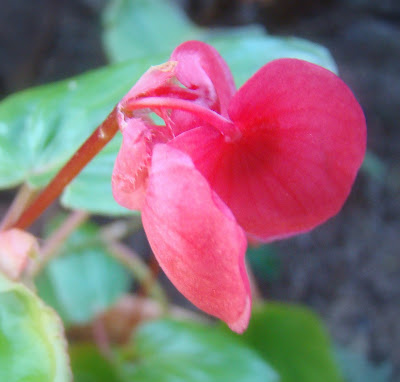 It's that wonderful day of the month in that wonderful month of the year, and the rabbits or whatever have been at their dastardly work, chewing buds and blooms off a few things you won't see in this Bloom Day Post. 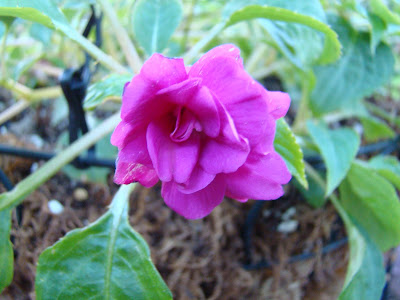 They left some things alone though, especially stuff in hanging baskets, which have ventured outdoors after keeping an eye on the 10-day forecast. It's been at least a couple of weeks since our last frost.

They (rabbits) don't hop this high. At least not yet, so the baskets should be safe.

Our weather seems settled and very spring-like. Of course, in the Chicago area, you never know. May 15th is our last average frost date, but we've had frost after that the last two years. 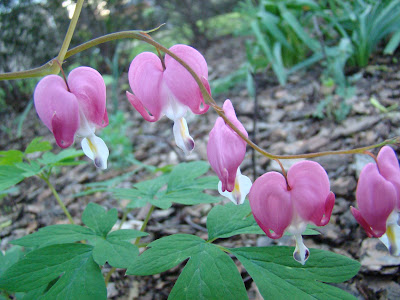 These babies have been blooming for a month now. I love old-fashioned bleeding hearts. 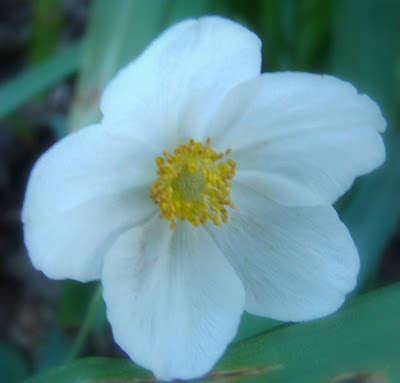 The lone surviving Anemone sylvestris bloom. This one is surrounded by surprise lily foliage, otherwise the varmints probably would have gotten it too. 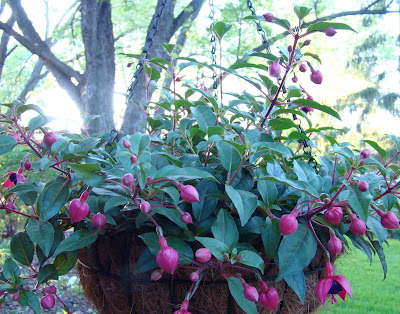 They can't reach this fuchsia though, ha ha! This year I will get a photo of a hummingbird. They tease me relentlessly when I have the camera outside. When I don't they linger at the fuchsia a good long while. 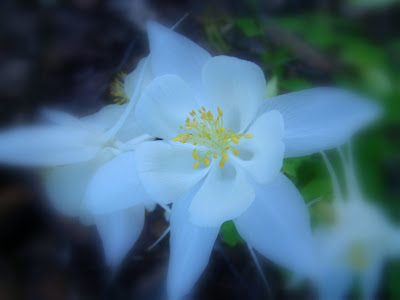 I've always had white columbines. These were planted the first year I lived here. 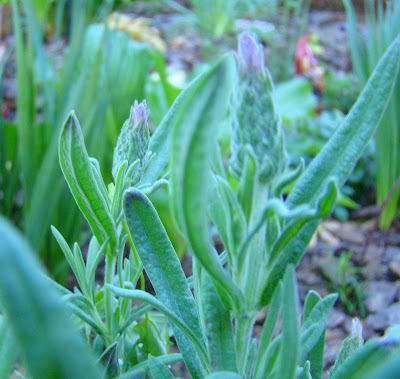 Lovely lavender, a gift from K, my oldest daughter, for Mother's Day. 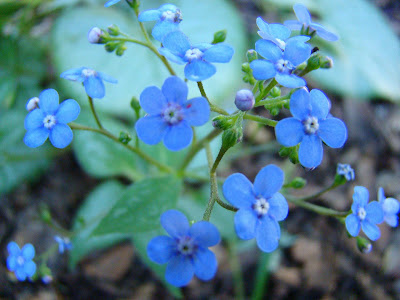 Beautiful, tiny brunnera blooms. These are from Looking Glass. 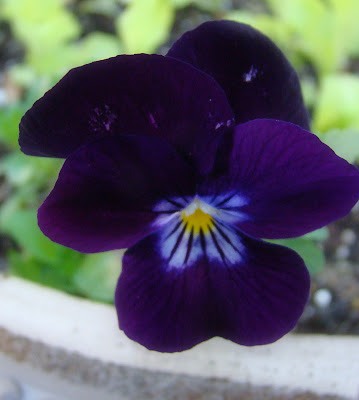 This pansy came from the Garden Show. It seems like a long time since I was there. 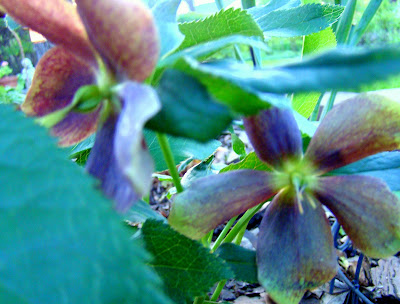 The hellebore lost some blooms to critters, but some have survived. Last year this hellebore held on to its blooms until late fall. This spring two more hellebores were added to the garden. 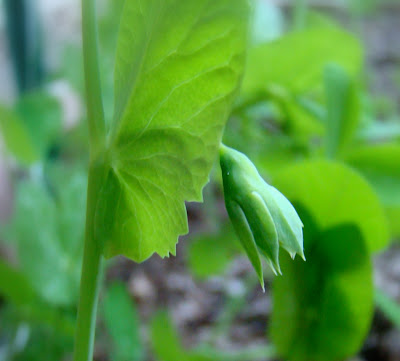 Last but not least, the peas are budding!

Happy Bloom Day everyone, and thanks to Carol at May Dreams Gardens, in her glory in the marvelous month of May. Just two short weeks from today, I'll meet Carol and about 50 more garden bloggers when we gather in Chicago for the 2nd annual Garden Blogger's Spring Fling.
Posted by garden girl at 5/15/2009 05:00:00 AM 26 comments: 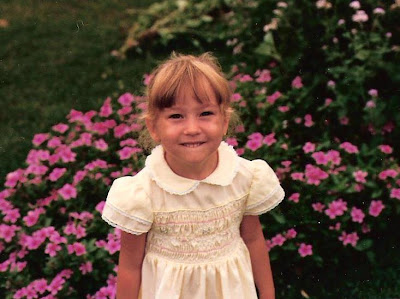 It was a beautiful, sunny May day when the baby of the family was born at home with her older sisters, extended family, and our closest friends gathered 'round to welcome her into the world. It's hard to believe that was 26 years ago.

After living far from home during the last couple of years, she's back and putting down roots in her first garden of her own. Imagine my excitement when she visited a few weeks ago and asked for information on planting a veggie garden! She went home with lots of motherly gardening tips, seeds, tomato starts, and an armload of books followed by emails full of links on veggie gardening.

Good luck with your veggie garden honey - I know you'll make a great gardener - it's in your genes after all!

Change happens quickly in the garden this time of year. There are fleeting moments of bloom eagerly anticipated, and gone too soon. In just a week, one of my favorite shrubs started blooming, peaked, and finished. I'm not sure which it is - Amelanchier arborea, or maybe Amelanchier canadensis? Either way, it's been here for many years, and it's beautiful. It blooms in mid-to-late April. Birds devour the berries in June, and its fall color is nothing short of spectacular. Each leaf is a masterpiece of intense oranges, yellows, and reds. 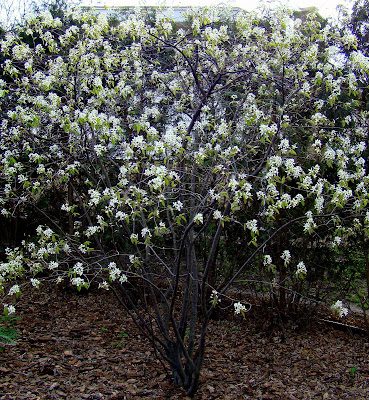 The serviceberry's done blooming - this photo's from late April, just before a heavy rain prematurely ended it's typically fleeting bloom period. It's too pretty to let its delicate, airy bloom go by undocumented. 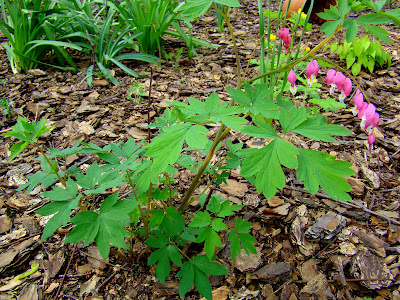 The old-fashioned bleeding hearts were planted four years ago. The first year they were tiny and only one bloomed. They went dormant in late June. The next year they never came out of dormancy and I thought they were goners. Last spring I was delighted to see them re-emerge, but they never quite recovered from their early trampling by some suburban wild thing or perhaps a neighbor's pet straying from home. This year they're happier than ever, and seem to have finally settled in. They've just started blooming. Behind them you can see some surprise lilies, a few baby Anemone sylvestris, an epimedium, three Celandine Poppies (Stylophorum diphyllum,) and two tiny sedums started from cuttings late last fall - probably Autumn Joy. 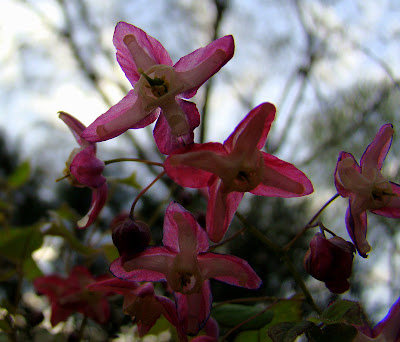 Last spring I planted my first epimedium. It didn't bloom and went dormant in June, but I remained hopeful. This garden has been full of surprises the last couple of years. The epimedium's back this spring. Two more epimediums rescued from a compost heap late last fall joined the party this spring. 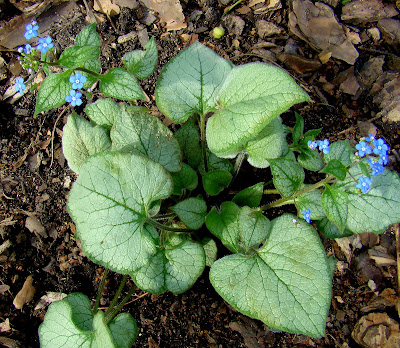 Last year Brunnera macrophylla 'Looking Glass' jumped into the trunk of my car when I wasn't looking. It didn't bloom, and it wasn't very pretty. I wished I'd gotten Jack Frost instead. So this year I did, but Looking Glass is turning out to be very nice too! I've always loved forget-me-nots, and blue flowers are my favorites. With these variegated brunneras, you get those same tiny blue blooms on a perennial with wonderful foliage that lasts all season. 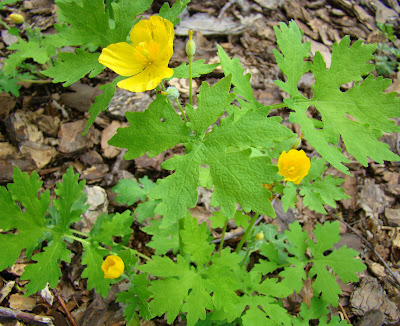 Celandine poppies were pass-alongs from a client last summer. They seem quite happy here. I love the blooms and the foliage.

Nothing but maple seeds seem to self-sow around here, but I wouldn't mind at all if a few of these babies managed to reproduce. So far even typically rampant self-sowers haven't accomplished this feat in this garden. It's a mixed blessing really. I hate the maple seedlings, wish I'd get some babies, realize I need to be careful what I wish for, and don't miss weeding. Aside from lots of maple seedlings and an occasional buckthorn, weeds are rare in our garden. 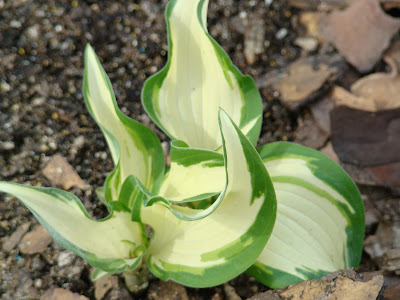 Hosta 'Night Before Christmas' was new last spring. It went dormant in July, and now it's back!

The first couple of years this garden had more losses than survivors. Even now, in the tangle of maple roots, everything establishes slowly. It has tested my gardening confidence and patience. This spring, after five years, there are delights and survivors in every ray of dappled sunlight that reaches through our leafy canopy, and even the deepest shade is coming to life. 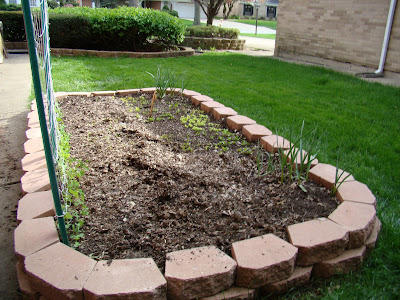 The veggie garden is getting a slow start thanks to a cool cold spring. The peas are climbing the trellis, and there's baby lettuce of all sorts, radishes, spinach, endive, beets, and life-changing garlic growing in the garden now.

There's still room to plant, and as the cool-season veggies are harvested, there will be even more room for things like peppers, cucumbers, tomatoes, and squash. I'm still thinking about not growing so many ornamental containers this summer, and using some of the large pots for veggies instead. 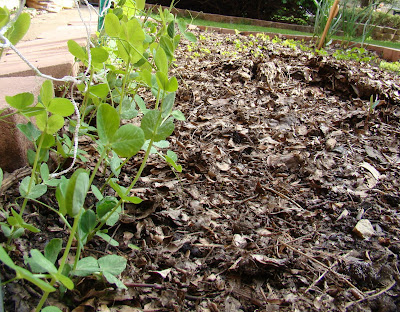 To me, peas are very pretty, graceful plants. I love seeing their tendrils grip tight to the trellis and hold on even on a windy day. Can't wait for them to start blooming and producing sweet, tender spring peas!