A couple of years ago, just as I was starting my business, I was contacted by a potential client who wanted to re-create Rick Bayless' garden in her backyard. Aside from being uncomfortable with the idea of copying someone else's design, frankly, since I'd only seen the garden on TV, I was pretty intimidated by the idea. Taking on such an ambitious project so early after starting my business seemed a bit overwhelming. 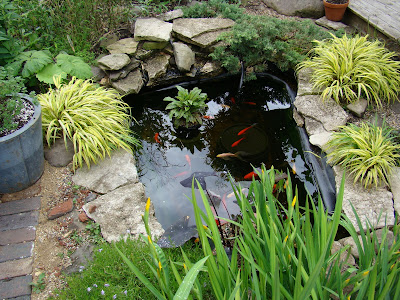 The client envisioned the project taking place over time, and was realistic in not expecting that everything would be done in one season. Still, I ultimately decided I was probably not the best fit for the project. 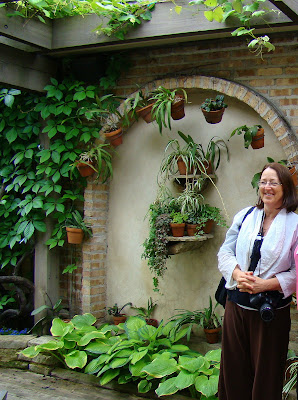 Gail from Clay and Limestone! What a joy it was to meet her.
The backyard garden of Chicago chef and restaurateur Rick Bayless and his wife Deann was the first stop of Spring Fling's very busy Saturday. We were treated to a tour of the garden by Bill and Lori Shores, the husband and wife team who take care of it. I was wowed by many elements of Mr. Bayless' garden, both the ornamental and food production aspects. The things that impressed me most were how accessible the materials used in the garden are, how creatively they were put together, and how 'real' the garden is. 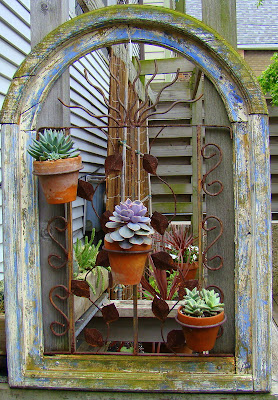 Being a celebrity and all, I think Mr. Bayless could probably afford a hoity-toity back yard. This place was lovely, don't get me wrong, but it was also very 'normal.' It was rustic, warm, family-friendly, unique, wonderful for entertaining, and just so darned down-to-earth. It was a garden that had clearly developed over time, and continues to evolve, just like the gardens of most of us average, everyday people. 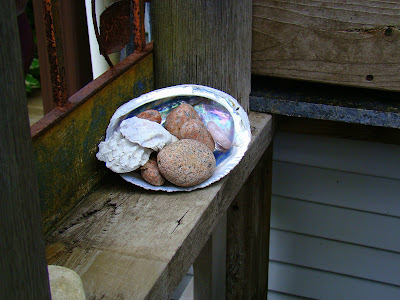 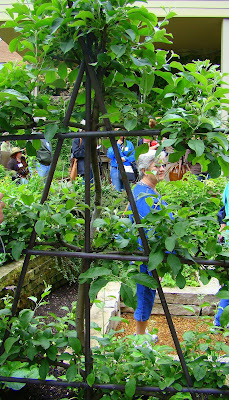 A conduit trellis supports an espaliered apple tree. Nothing fancy - this is something just about anyone could do. I loved the creative use of very ordinary, accessible materials. 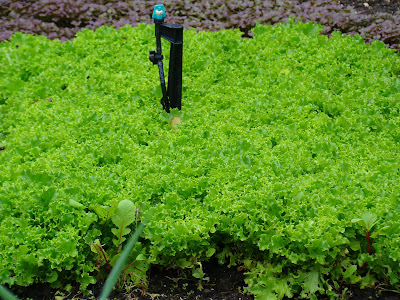 Another accessible, affordable idea, a mister system cools and moistens the soil, aids in seed sprouting, and facilitates succession planting even in the hot, often dry summer months in Chicago. 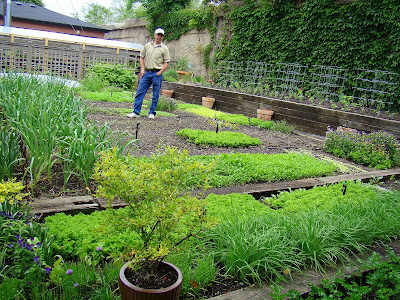 Bill Shores showing and telling us all about the kitchen garden. 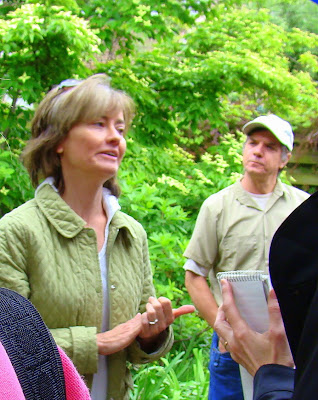 Bill and Lori Shores, our hosts for this tour. They couldn't have been more warm and welcoming.
The tour of Mr. Bayless' garden was a highlight of Spring Fling Saturday - an inspiring and educational event. I came away with lots of ideas for my own tiny veggie bed, and some creative inspiration for the use of found objects and personal keepsakes. Thank you Rick and Deann Bayless for sharing your garden with us, and Bill and Lori Shores for the wonderful tour!
Posted by garden girl at 6/04/2009 08:11:00 AM