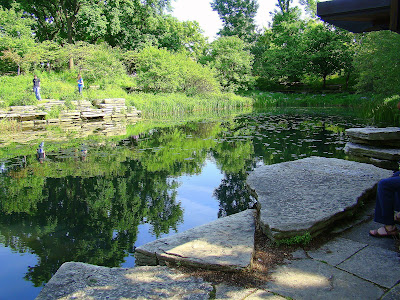 The last event Saturday at Spring Fling was our visit to Lincoln Park - Chicago's most famous and visited park. Lincoln Park attractions for gardeners include the Conservatory, Peggy Notebaert Nature Museum with its butterfly room, Grandma's Garden, and the Alfred Caldwell Lily Pool, formerly known as the Rookery. Even the zoo can be interesting to gardeners, and some of the zoo's architecture is beautiful and historic as well.
What I most wanted to see at Lincoln Park was the Lily Pool. I remember it from being a kid growing up on the north side of Chicago and taking family field trips on the weekends or taking the bus with friends off to the park, the zoo, or the beach. I remember the Lily Pool. It wasn't very nice back in the 1960's.
Mr.Brown Thumb, Kylee, her mom, and I enjoyed a lovely, leisurely stroll at the Lily Pool during the final leg of our very busy and sometimes stressful Saturday.

To refresh my memory of this garden's history, I reviewed one of my favorite public television programs hosted by Geoffrey Baer, on the history of Chicago's Lakefront. Most of the information below was gleaned from that program and the Chicago Park District's website. 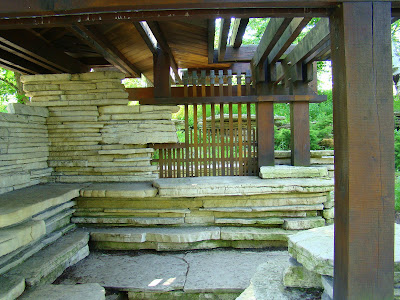 The Lily Pool was initially constructed in the late 1880's to be used for cultivating tropical water lilies. In 1936 the Lily Pool and surrounding area was redesigned by landscape architect Alfred Caldwell in the Prairie style to mimic a river of glacial melt cutting through the limestone surrounding it. 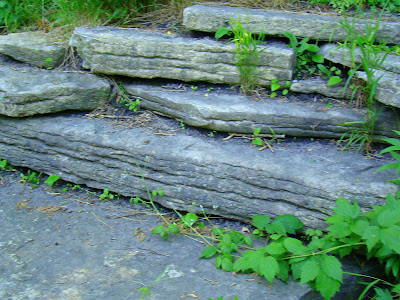 The limestone ledges made me think of Layanee, who was so kind to me at Spring Fling.
It's considered by many to be one of the most important historic landscapes in Chicago, and has been designated a National Historic Landmark.

Caldwell, who designed many of Chicago's lakefront landscapes, was frequently at odds with the Chicago Park District. Before the Lily Pool was completed, his budget was cut by the Park District in yet another dispute between the parties. Caldwell was so passionate about this project, he cashed in his life insurance policy so he could complete it. 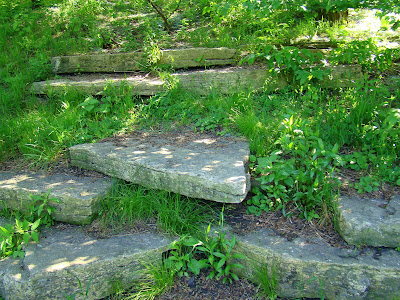 Eight years after Caldwell's Lily Pool was completed, the Park District allowed it to be included in the Lincoln Park Zoo's exhibits. It became home to some of the zoo's exotic birds. The birds destroyed many of the native plants Caldwell had purchased with the proceeds of his life insurance. The destruction of the plants led to erosion of the pool. Over time it fell deeper and deeper into disrepair and became a catch basin for trash. Invasive plants took over, leaving no trace of Caldwell's native plant design, and breaking his heart. I remember seeing it as a child, when it was more of a dump than a garden. 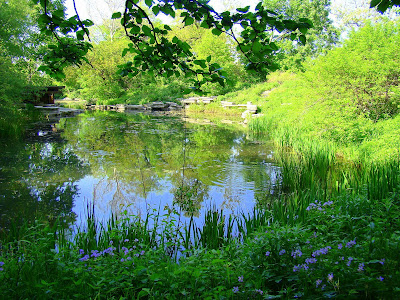 In 2001 the Park District partnered with Friends of Lincoln Park (now the Lincoln Park Conservancy) to restore the landscape according to Caldwell's original plan, as a sanctuary for people and wildlife. And sanctuary it now is. There is a quiet reverence and special spirit to this place. It's hard to describe, but easily felt. Following the restoration this beautiful retreat from the big city was renamed in his honor. The work included replacing invasive trees and shrubs with native plants, and restoration of the structures and hardscape. Paths were also added during the restoration. Sadly, Caldwell died in 1998, three years before his beloved pool and garden were restored to their original grandeur.

The wildlife that finds refuge in the pool and surrounding garden includes over 200 species of birds, as well as dragonflies, butterflies, frogs, and turtles. 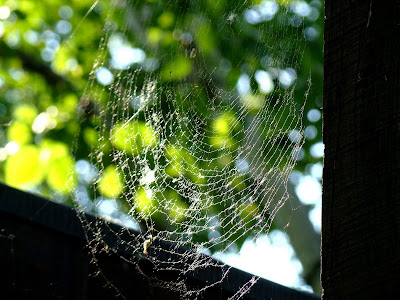 I too found a peaceful refuge in the garden with a small group of new friends. It was grand to see what this once-unsightly childhood memory has since become, spending part of the last leg of Saturday's tours in the cool, breezy, peaceful shade, listening to bird songs, discovering tiny wildflowers, and watching dappled sunlight reflect and play upon the shimmering surface of this lovely pool.
Posted by garden girl at 6/03/2009 06:40:00 AM