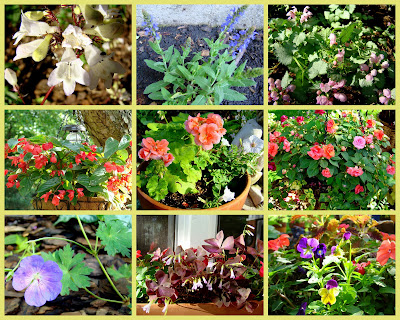 Better late than never, here's some of what's blooming here this month, starting at the top, left to right - Penstemon digitalis 'Husker Red,' and a new salvia - 'Blue Hill,' planted near the veggie garden to (hopefully) attract more pollinators there, and lamium, which will bloom off and on all summer.

2nd row: a dragon wing begonia, an experimental Pelargonium with Spring Fling Supertunia courtesy of Proven Winners (the experiment is a geranium/Pelargonium in very little sun - less than 3 hours a day of filtered sunlight, budding and blooming very nicely,) and double impatiens in a hanging basket. 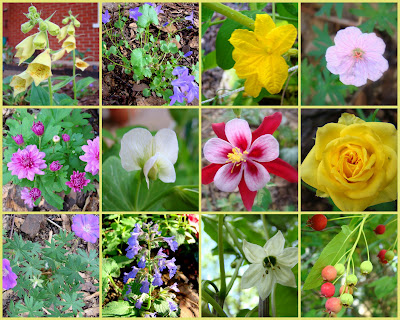 Again starting from the top left, this is the last, and always the sturdiest Digitalis grandiflora of three. They were among the first perennials I planted here 6 springs ago. I'll be saving seeds later this summer in case it doesn't come back next year. Next are Campanula carpatica, a pretty little thing with a long bloom period, a squash blossom, and Geranium sanguineum var. striatum.
2nd row: yes, that's a mum blooming in June. Billed as a 'spring blooming mum,' and very cheap at the big box store, I got two of them, this one and an orange. Spring-planted mums are more likely to survive winter. In my last house I had a bunch of mums planted in the spring that came back year after year. I'll probably take some cuttings of these two - mums are very easy to start from cuttings. After the mum, a pea blossom, Aquilegia 'Cardinal,' (a/k/a columbine,) and a mini-rose that's been blooming in part sun for six years, along with a red one.
3rd row: another Geranium sanguineum, this one is a/k/a bloody cranesbill - one of the few plants brought here from a previous garden, it's been very slow establishing, but has hung on for six years. This is the first year it's been of any size at all, blooming for about a month, and I accidentally broke off most of it pulling maple helicopters out of the mulch. Next is Nepeta x faassenii 'Blue Wonder,' a shorter catmint. I've grown this one for years in previous gardens. It may be heresy to some, but I like it much better than Walkers Low or other tall catmints. Next is a pepper blossom. Don't ask me what kind, as none of the peppers (or tomatoes) were labeled. Did I ever mention I like surprises?

The last photo is Juneberries (a/k/a serviceberry,) an Amelanchier, an unknown cultivar, maybe canadensis, that's been here for many years. I know, they're not blooms, but they're pretty and fleeting - thought I'd get a shot of them before the birds gobble them up. June berries are very tasty - sort of a cross between a cherry and a blueberry. They're more seed than berry, and we leave them for the birds who will be spending a lot of time in this beautiful shrub as the berries ripen over the next couple of weeks. As if serviceberries weren't beautiful enough to recommend themselves on their own, the varieties of birds they bring into the garden in June makes them must-have shrubs for me.
This is finally the year this shady garden is beginning to come into its own. I'm sure the copious rain this spring hasn't hurt. But after six years, although it will never be 'done,' the garden is full of plants. There are no big empty spots anymore. Older plants are establishing well, and newer plants are thriving. There were a lot of natives added this spring, but then, that's a whole other post(s) for another time. 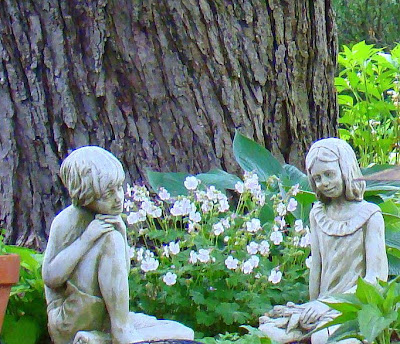 Here's one full-size photo. This is Geranium x cantabrigiense 'Biokovo,' planted in spite of dire warnings of its invasiveness. Spreading by above-ground rhizomes, I find it's very easy to keep in check. I love it's evergreen foliage, (often red over the winter and in early spring,) it's long bloom period, and the wonderful, spicy fragrance of the foliage.
Thanks to Carol of May Dreams Gardens, who I got to meet at Spring Fling (and she's a sweetheart,) for hosting Garden Blogger's Bloom Day on the 15th of each month.
Posted by garden girl at 6/16/2009 06:16:00 AM